Oscar-winner Charlize Theron was spotted in Hollywood this week after months in Africa shooting the new Mad Max movie. She went bald for the role. She still looks great. 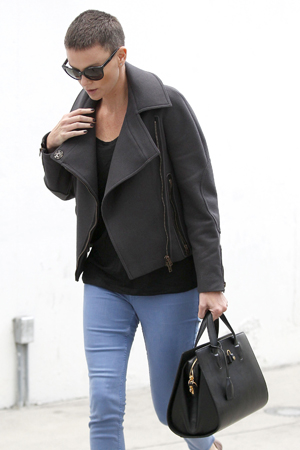 Who needs hair when you have that face? Charlize Theron is back home in Los Angeles after spending almost six months in Namibia shooting the Mad Max remake, and she’s still sporting the buzz cut she got for the film.

Photogs snapped pictures of Theron Saturday as she hit Hollywood’s Arclight Theater with her mom. It’s kinda amazing they even recognized Theron, dressed down as she was in jeans and a black leather jacket, with a short thatch of light-brown hair instead of her trademark shiny blonde.

Are we to assume this is her natural hair color? And are those blonde highlights, or has she gotten in a bit of gray? She’s 37, wouldn’t be surprising. Still and all, pretty cool to see an actress sporting natural hair.

Theron went bald for Mad Max: Fury Road, the remake of Mel Gibson’s 1979 dystopian flick Mad Max. In Fury Road, she plays Furiosa, the driver of a vehicle carrying Max and his cohorts across the barren wasteland. The ensuing battles on the road form the basis of the film.

Mad Max: Fury Road has been getting unusual buzz, since it’s written and being directed by George Miller, who wrote and helmed the first three Mad Max movies.

Miller has reportedly been working on Mad Max scripts for decades, and has at least three movies planned out carrying the Mad Max series forward.

Mad Max: Fury Road is scheduled for a 2013 release, but there have been innumerable production and other delays, and no specific date has been announced.

George Miller is also the co-writer and director of the Happy Feet animated serous about singing penguins.