Channing Tatum and wife Jenna Dewan-Tatum announced today that they are expecting their first child in 2013. That is one genetically lucky little fetus. 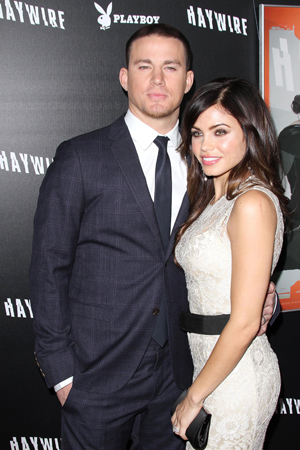 Channing Tatum and wife Jenna Dewan-Tatum are celebrating something simply swell under the Christmas tree this year: The pair is set to be first-time parents next year.

The couple confirmed their pregnancy to People, which just named Channing the Sexiest Man Alive in November. That may be hard for the littlest Tatum to explain come middle school time, but boy, those baby pictures are gonna be choice.

Tatum had hinted around to People that babies were on the way: “I’m ready; I think she’s ready,” Channing said about his wife. They are both 32 and have been married since 2009.

When asked how many kids he wanted, Channing dreamt big.

A more realistic figure, Channing ultimately surmised, was a family of five, “but I just want one to be healthy and then we’ll see where we go after that.”

Channing and Jenna met on the set of 2006’s Step Up, and as late as 2011 Dewan-Tatum told Wonderwall that the couple hadn’t slowed down enough to “even have the thought of having kids.”

Surprising that 2012 — a year when Dewan-Tatum starred in the well-regarded American Horror Story: Asylum, and Tatum killed in everything from 21 Jump Street to Magic Mike — was the year they slowed down enough to both think of conceiving and actually doing it.

What were they doing in 2011, studying for medical degrees or something?