Gurjinder Basran’s debut novel has been compared to Jhumpa Lahiri’s writing, and for good reason. This tender, thoughtfully written novel is a no-brainer for our Red Hot Book of the Week. 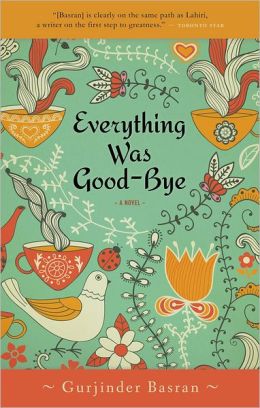 A young woman struggling against the confines of her restrictive culture. Growing up between two worlds, not sure of where you belong or who you really are. These are timeless stories in immigrant literature. Whether it’s a young Indian woman as in Everything Was Good-bye or a young man coming to the United States from Eastern Europe or Africa; whether you’re an immigrant, the child of immigrants or simply someone who is familiar with their stories, any tale of someone growing up between two cultures will resonate. Gurjinder Basran’s debut novel is one that speaks to a multitude of backgrounds because the story revolves around something we can all identify with: the desire to be free.

Meena is the youngest of six daughters, raised singlehandedly by their mother after their father died in a work-related incident. Though Meena’s parents were educated in India, after they immigrated, they were reduced to seeking out menial labor. She understands how hard her parents work and appreciates it, yet she can’t fathom why her mother yells at her every evening for walking home with her friend from high school, Liam. Though she’s been exposed to the Western freedoms that many take for granted, Meena’s mother has raised her children traditionally. She expects Meena to not associate with boys, to stay home and learn to cook and to agree to an arranged marriage when the time comes.

But Meena has other hopes and dreams for herself. She yearns to be free, but can’t bear the thought of breaking her mother’s heart. Meena’s older sister, Harj, couldn’t handle the restrictive environment and fled, choosing to lead a Western-style life of which her family would disapprove. Now they have little contact, and Meena’s mother claims she has only five daughters rather than her true six. There’s no room for a middle ground in Meena’s world, so over the years, she subsumes her desires in order to follow her mother’s wishes. But at what point will she stand up for herself and make a decision to be happy, to follow her heart and see where it leads?

Because I Said So! by Ken Jennings
Heads in Beds by Jacob Tomsky
Love in the Years of Lunacy by Mandy Sayer