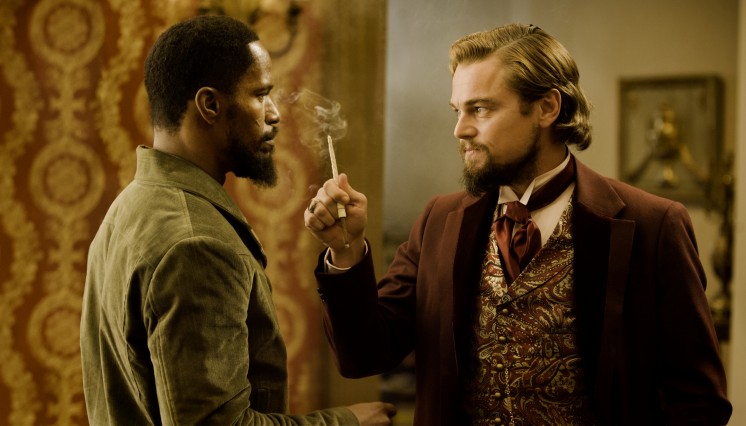 This is why he’s an award-winning actor: Leonardo DiCaprio cut his hand open so badly that it required stitches on the set of Django Unchained, but never yelled, “Cut,” to attend to his bloody injury.

In an intense scene with co-star Samuel L. Jackson, Leo pounds a table, where a shot glass is sitting. “But what happened was the shot glass somehow slid over underneath where he was always slamming his hand down. And in one take, he slams his hand down and the shot glass goes through his hand,” co-star Jamie Foxx explained during the press conference for Quentin Tarantino’s newest movie in NYC. “And now blood is shooting out [of] his hand and I’m like ‘Does everyone else see this? This is crazy!’ and he keeps going. And I almost turned into a girl looking at it! But what was amazing is he was so into his character that even when they finally said ‘Cut,’ he was still this guy… people almost gave him a mini ovation. It was amazing to see that.”

Playing Calvin Candie — the evil plantation and slave owner in Tarantino’s movie — was a real departure for DiCaprio, who’s well-known for playing hunky heroes. “There was absolutely nothing about this man I could identify with,” Leo told reporters, “I hated him and it was the one of the most narcissistic, self-indulgent, racist, horrible characters I’ve read in my entire life… and I had to play him. It was too good of a character not to do, in that sense.”

Leo said the cast, which includes Kerry Washington and Christoph Waltz, helped support one another throughout shooting the most brutal scenes. “It honestly felt like we were cheerleaders for one another,” he shared, “Like ‘Damn, that sh*t was good. Keep going! Be even worse to me the next day.'”

Jamie Foxx, in the title role of Django, personally pitched himself for the project and had no qualms about playing a slave. “I wasn’t asked to play [the part],” he shared, “I actually saw that the movie was already going and someone else was supposed to play it and I thought ‘Wow, here’s another project I haven’t heard about’. And actually I had a management change and my acting hustle was like, ‘First of all, I don’t care what it is. It’s Quentin Tarantino and all these people on this stage and I feel that the people here on this stage can tackle absolutely any subject matter’.”

Despite the sensitive subject matter of slavery, the all-star cast turned in a stellar performance and said they all feel grateful to be a part of Tarantino’s latest movie, which hits theaters Dec. 25. “We’re all lucky bastards up here,” Leo said. “I love acting. It’s what I always wanted to do my entire life and I hope to continue doing this for a long time to come. It’s the greatest job in the world.”