While some may believe insomnia to be a flaw, Adam Young, the creator of Owl City, used it to his advantage — and we’re sure glad he did. 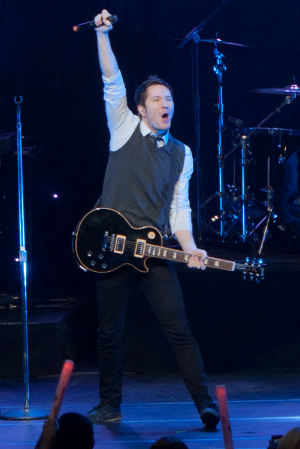 Adam spent night after night in his parents’ basement experimenting with different tunes, posting his creations on Myspace and accumulating a large following that spurred him on to his current success.

“I never imagined that this thing [his music] would have taken off like it has done,” Adam said, rather shocked himself.

We’re certainly not shocked about his success, which includes the quadruple-platinum hit single “Fireflies.” This catchy song led him to a collaboration with “Call Me, Maybe” singer Carly Rae Jepsen. Adam admits to that being his favorite song, but don’t expect to hear the same beats on this fifth album he’s currently working on.

“I am a believer in not repeating yourself too much as an artist. I think it’s a shame if you make the same kind of stuff over and over, even if you love it. So I want to try something new; not so new that people ask, ‘Where did that come from?’ but something maybe a little edgier. I am really into dance music, I love listening to trance music from Europe. Something bittersweet and melancholy but really powerful and upbeat, energetic,” Adam said.

While he’s proved able in creating such interesting strains of music all by himself, Adam does hope that at some point he can mix his creativity with a few well-known musicians.

There’s one thing that confuses people about Owl City: where the name actually came from.

“It doesn’t mean anything. It’s about the imagery, it’s about where your mind goes when you hear the name, it’s meaningless but it’s kind of cool, right, I mean, it’s memorable. See, the mystery is what’s cool, is it a band, is it a guy, I love that,” Adam shares. Even though he seems to not be sure where the name came from, his explanation is right on point.

Curious about his Christmas plans and what he’s most excited for, his favorite place in the world to travel, how he stays so grounded and… whom he sees himself kissing under the mistletoe this year?

Check out the rest of the interview with Owl City below!