The couple has been on a rollercoaster ride since they started dating, but it looks like they’ve both decided to be together forever. And the whole world got to share in their engagement. 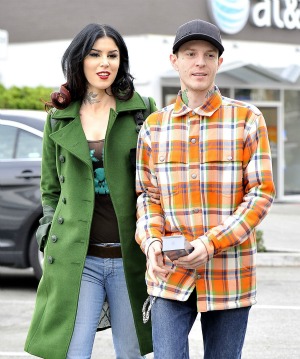 It has been an up-and-down relationship between Kat Von D and Deadmau5 (whose real name is Joel Zimmerman) but at this point, it looks like it is up. Way up. The 31-year-old DJ tweeted a proposal to Von D Saturday night, Dec. 15.

“I can’t wait for Christmas so…. Katherine Von Drachenberg, will you marry me?” Deadmau5 tweeted.

He attached a photo of the ring with the words, “Changing the diamond to a black diamond FYI. Sorry for the jpg … they’ll finish the actual ring soon I hope. I love u.”

She quickly tweeted, “!!!!!!!!!!!!!!!” followed by “Mi corazon! Thank you all for the lovely congratulations! Please excuse me while I go squeeze the hell out of my fiance!”

It’s no surprise the engagement happened on Twitter. Just a few months ago, the couple broke up, again sharing their lives on the social media site. At the time, Von D tweeted about the split.

“Man…Can’t say I didn’t give it my best,” she said. “I sure was wrong. But at least he made it a no-brainer to break that off. #lessonlearned”

Deadmau5 also tweeted about the break-up at the time.

“Going to spend a little while screwing my head back on. I guess I’m not cut out for relationships right now,” he said. “I’ll figure it out. No hard feelings.”

But the couple quickly reunited, and Saturday night, things were good for Von D and Deadmau5.

“Holy f**king s**t. I’m engaged and stuff!” Deadmau5 tweeted. “Thanks for the well wishes and support from the horde and everyone else! Brb while i spend the rest of my evening with my future wife.”

Von D was previously engaged to Jesse James, Sandra Bullock’s ex-husband. Throughout the years, the 30-year-old has shared much of her love life on her TV shows, including LA Ink.

There is no word on a wedding date yet, but at least we already know what the ring looks like!