Because I Said So! The Truths Behind the Myths, Tales & Warnings Every Generation Passes Down to Its Kids by Ken Jennings is a refreshing read about parenting and our pick for the Red Hot Book of the Week.

About Because I Said So! 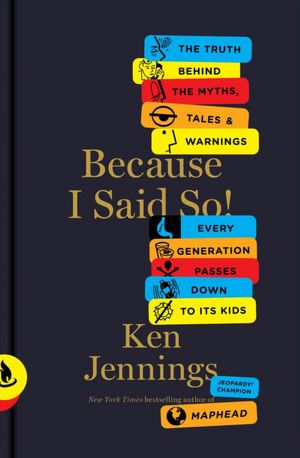 With the new year just around the corner, most people are taking a good hard look at what they can improve about themselves. And although it’s every parent’s intention to do the best job she can with her child, most moms and dads feel they could always be doing better. Because of all the information out there — from what you’ve been told by your own parents to Google — it’s often hard to know which path to take when it comes to a parenting concern.

In Because I Said So!, trivia guru Ken Jennings, who you may recall broke game show records nine years ago when he won 74 consecutive games of Jeopardy!, takes scientific findings, medical case histories, and even some experiments with his own children and examines, among other things, some of the most common “pieces of parenting wisdom” that have been been passed down from generation to generation to find out if they are, in fact, true. Or, if after all this time, people have been following advice that really has no substantial foundation.

Jennings looks at urban myths and parenting edicts such as: What really happens if you sit too close to the television? Is it damaging to your eyesight? What if you swallow your gum? How bad is it for your digestive system? Can you swim after meals or should you wait 30 minutes? and Why is sitting up straight so important?

Most of you reading this have likely heard at least one of these from your own parents. And wouldn’t you like to know what Jennings found out, so you could finally know, after all this time, if old wives tales such as cracking your knuckles is really going to lead to arthritis?

He refers to his book as the “anti-helicopter parenting” book all parents have been waiting for. As a mom, I found it not only entertaining (I especially love the title), but also refreshing. It’s about time someone figured out if these ideas were actually founded. I definitely recommend this book, which would make the perfect gift for any mom or dad.