The actress has been a mom for almost a year now, and she is talking about how that has affected her life… every area of it. 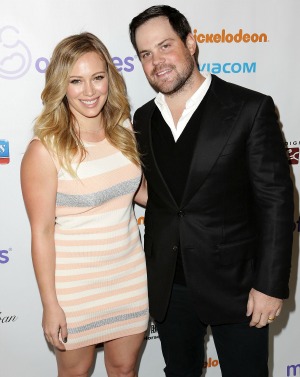 Hilary Duff gave birth to her first child only nine months ago, and she sat down with Access Hollywood Friday to talk about how having a baby has affected her life.

Duff said her son Luca Cruz (with husband Mike Comrie) is “into everything” according to Us Weekly. “I’m running around the house just trying to keep up with him. He’s so fast… He’s trying to talk and he’s a little aggressive.”

But she said another very important part of their lives have changed too — their sex life. When asked how having a child has affected things, she said it has taught the couple how to be creative.

“It’s definitely different,” she said. “I’m so exhausted at the end of each day, so I’m like, ‘Can this not happen at night when I’m exhausted? You find different times to do it.”

The couple have been married for a little over two years now, but aren’t quite ready to think about having another child yet.

“Mike and I are literally so obsessed with Luca,” she told Access Hollywood. “He’s perfect! We should just be one and done. But I think once your kid starts getting older you miss that baby phase and you go in for round two.”

The former Lizzie McGuire is also working to get her body back in pre-baby shape, but she said it’s not her number one priority right now.

“I am worried because everyone wants their body back,” she said according to Us Weekly. “It’s all in time, you know? It took nine months to get there, so hopefully it won’t take that long to get it off. But I’m doing it slowly.”

Duff hasn’t been doing as much acting lately, but seems to do a part every so often. She also appeared on the last season of Project Runway.