Marilyn Manson nearly had his ear sliced off in a recent fight! The hardcore rocker recently treated fans to a grisly picture on Twitter of the damage that was done. 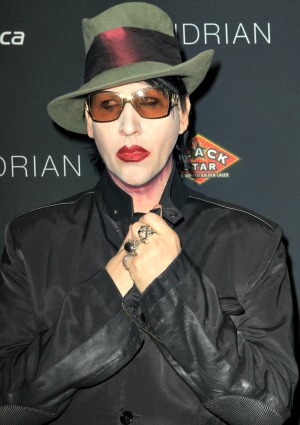 Marilyn Manson may have nearly lost an ear earlier this week, but he hasn’t yet lost his quick wit or sense of humor!

Tweeting a photo of his left ear all bandaged up, the rocker shared, “I was hit by a glass table in a dangerous fight. I was however, the victor but had to have 24 stitches to keep my ear from becoming Van Goth.”

Fresh out of a “dangerous fight” and a visit to the hospital, and yet still composed enough to toss out a play on words from the annals of the art world. Kudos, Marilyn Manson!

Shortly before the incident, the 43-year-old and Rob Zombie’s Twins of Evil tour had landed in Basel, Switzerland. Here’s to hoping Saturday night’s trip to Ekaterinburg, Russia, doesn’t jeopardize any other body parts.

Little could Marilyn Manson have known at the time that days after his ear injury, his name would hit the press in relation to the Connecticut school shootings.

“Seeing some people blame Obama and also Marilyn Manson again,” one Twitter user wrote Friday in reaction to the tragedy. “Stop looking for excuses and stop looking to justify the crime.”

Another tweeted the words that Manson, whose controversial music was blamed by many for the 1999 shooting spree at Columbine High School, shared over a decade ago.

When asked if he could talk to the kids at Columbine or the people in that community, what he would say, Manson told filmmaker Michael Moore, “I wouldn’t say a single word to them, I would listen to what they have to say, and that’s what no one did.”

As of Friday evening, Marilyn Manson has not tweeted any reaction to the Connecticut school shootings.