Barbra Streisand and Seth Rogen talk about their roles as a mother-son duo in The Guilt Trip with SheKnows correspondent Whitney English and her own mom! 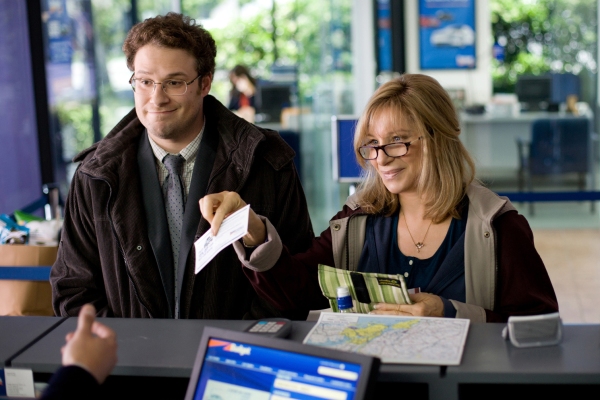 The last person you’d probably expect to star in a movie with risque comedian Seth Rogen is the prim and proper Barbra Streisand. But these two balanced each other perfectly in their new film The Guilt Trip, even falling into their mother-son roles off-camera.

To promote the film, the duo chatted with SheKnows’ own mother-daughter pair, me and my mom, Patti English. It was easy to see instantly that Barbra had developed a type of maternal bond with her co-star Rogen, giving him her seal of approval on his new haircut.

“I always loved to fix [his hair],” said Barbra of her on-set mommying of Seth. “I just cut my hair without telling her I was going to,” Seth joked in return. “I love it. I saw it last week and I admired it,” Barbra praised.

As a mother to her 45-year-old son Jason, Barbra has a lot of experience dealing with a growing young man. She told us that she and Jason are so close that she only did this movie after he signed off on it.

“The biggest point of me accepting the movie role was reading it with my son,” she told us. “He was recovering from back surgery and we were in his bed reading it. When he gave me the ‘ups’ that he liked it, I did it.”

In the movie, Seth plays Andy, a young man trying to sell a product he’s developed by taking meetings across the country. Streisand plays his mother, Joyce, who comes along for the ride. The entire trip, the two deal with the classic parent-child dilemma of “mother knows best.”

“I think when you’re around your parents and you’re in your 30s or late 20s you revert back to a teenage version of yourself,” Seth admitted. “I find myself being short with them, and not treating them with respect. It’s hard not to do.”

Barbra acknowledged that she, too, played the opposite with her own son growing up.

“That’s the nature of relationships with your children,” said Streisand. “We think we know better. Children have to find out for themselves. Your mother could tell you everything. That is the moral of the story, Mother is always right.”

I know my mom certainly agrees with her, and I usually end up agreeing as well!

Be sure to catch The Guilt Trip with Barbra Streisand and Seth Rogen in theaters today… and bring your mom!