It looks like one tabloid magazine is in overdrive mode by reporting that Twilight actors Robert Pattinson and Kristen Stewart are about to get engaged. 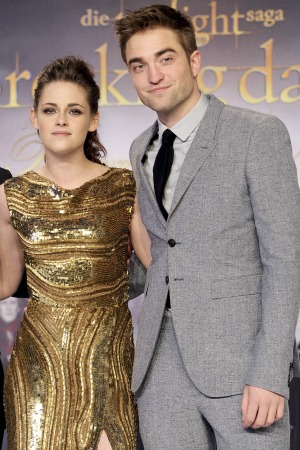 If you want believe OK! Magazine, apparently Robert Pattinson and Kristen Stewart are about to get engaged. The magazine wants us to believe that the on-again/off-again couple is heading to the altar after a rocky 2012.

They are going as far to say Pattinson is designing a simple ring for his gal because, as an insider told OK!, “Kristen is not the type to wear anything too fancy. But Rob wants something that makes a statement, which means he’s got his work cut out finding something that will be original and impressive that she will wear!”

The best part is that the insider even knows the type of stones the Twilight actor is using, and it isn’t going to be traditional in any way.

The insider said that Rob is “interested in combining rubies and black diamonds.The idea for black diamonds came to him when he was writing a song for Kristen. They are much more rare than regular diamonds, so Rob’s really drawn to the symbolism of that because they both feel like their relationship is extremely rare.”

Of course, OK! has had KStew and RPatz engaged and pregnant many times over the last year. In fact, Gossip Cop is calling them out on the story saying, “OK! has long had ZERO credibility when it comes to Pattinson and Stewart, and its sources have not gotten any more reliable over time.”

The website points out other stories that the entertainment magazine has reported on the couple, and they have all turned out to be false. According to Gossip Cop, the bottom line is simple, “This ‘engagement ring’ story is just another example of the magazine’s speculative, fact-free treatment of the couple.”

What we do know is that the couple are back together after a rough summer when Stewart was caught kissing her Snow White and the Huntsman director Rupert Sanders in a park in LA. Besides Stewart having a boyfriend, Sanders was married with two kids. Both guilty parties have reunited with their significant others for now.

In the meantime, don’t look for the wedding ring, wedding registry or a wedding at all from Bella and Edward.