In a poor attempt at a music video, Girls Aloud remind us why they never will transition onto the big screen. 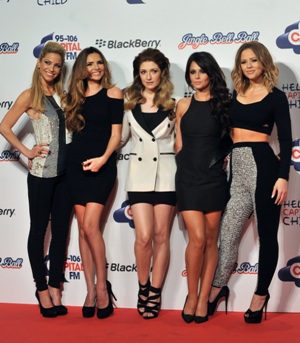 The song itself is actually pretty good. With lyrics that focus on how a man’s love has changed how they view themselves, I can understand how theoretically this has a positive message.

But Girls Aloud fans, sorry to rain on your parade, the music video does not, at all, do the lyrics justice.

Directed inside of a beautiful old mansion with colored leaves dancing around the floor, the video was the perfect setup for a meaningful performance from this talented girl group.

They all were delicately arranged, wearing minimal makeup and muted colors. The bareness of their appearance, I presume, was intended to be a testament to bearing their souls and the honesty of the song. The song itself, has lyrics like:

Yet, Cheryl Cole looks angelic, put together, and I’m not sure she’s even wearing mascara. Now before you get on me for taking the lyrics too literally, they do try to re-enact the song in other places.

And come on, you really don’t believe you’re beautiful? Everyone has his or her share of insecurities, but as an average-looking woman myself, rather than making it relatable, it comes across as a little arrogant. There they are — pristine, alluring, and porcelain-like — talking about how it took “love” to make them feel accepting of themselves. Really? Imagine how hard it must be for the rest of us who don’t look photoshopped.

It could also be the fact that they act as though they don’t really believe what they are saying. Hard to “act” sincere in between striking the Vogue poses.

I miss the Spice Girls

One emotion Girls Aloud are successful in inducing was my longing for the original girl group — the Spice Girls. They may not have been great actresses (even though I did enjoy Spice World), but they knew how to overact their respective personas to add some flair to their music videos. Even their more subtle ballads (Too Much, Viva Forever) had dimension.

Why is this an editor’s pick then? It is 100 percent entertainment. It’s a pick for the same reason Failblog is a great read. Watch these beautiful ladies fail at convincing you that they believe what they are singing. And the horrible placement advertising for Nikon.

Check it out. Let’s hope their next video is better!