Britney is back on top! She may have had a few tumultuous years, but she wasn’t going to let herself slide down the Lindsay Lohan path. With a new TV gig and some new music, Britney Spears is making more money than anyone else. 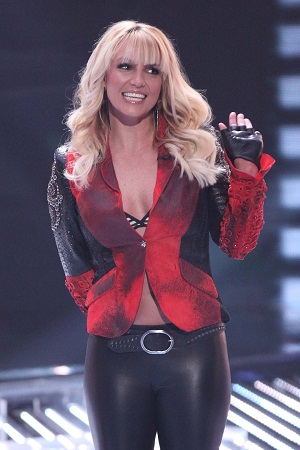 Britney Spears deserves all that dough, too. She hit a few roadblocks during the past decade, yes, and some of her singles weren’t as great as others.

But, she’s worked really hard at not becoming a hot mess like many celebrities who earn fame at a young age. (We’re looking at you, Lindsay Lohan.)

According to Forbes, Spears earned about $58 million between May 2011 and May 2012. She earned major cheese from her platinum album Femme Fatale, the subsequent tour, multiple endorsements from companies such as Sony and CoverGirl and, of course, her perfume. (Maybe that’s how LiLo should pay for her storage locker!)

Ranking at a close second, the forever brokenhearted Taylor Swift pulled in $57 million during that same time. She also had a few endorsements and a fragrance, plus it seems like she’s a touring machine.

Of the top 10, hip-shaking Shakira is at the bottom of the list. The poor girl only earned $20 million. That seems pretty good, actually, when you consider that she doesn’t actually do all that much these days. When was the last time she graced the top of the Billboard charts?

Perhaps the two biggest surprises on the list were Adele and Beyonce. Both lovely ladies have pretty much lived on the charts. Adele’s album 21 was released right in the middle of that year and should have earned her far more money. Then, again, due to illness, she canceled nearly all of her tour, and so far she’s shied away from endorsements. Now that she has a baby to provide for, will she (wo)man up and be the new face of CoverGirl, too? Or will she be happy to live on only $35 million a year?

Meanwhile, Beyonce seems to never leave our sights. For as busy as the woman appears to be, we thought she’d be a lot higher up. She’s been more visible than Lady Gaga this past year and she certainly works harder than Katy Perry, who seems more interested in flaunting her boyfriend.

What would we do without Forbes sticking its nose into the bank accounts of celebrities? Well, for one, we’d probably feel a little better about our own meager salaries. Way to boost 10 girls’ confidences while making everyone else’s recession feel 10 times worse, Forbes.

More on the highest-paid ladies