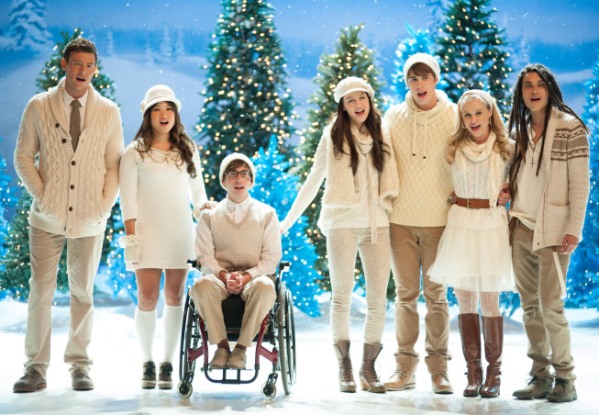 I usually drop an “OMG” at some point during a Glee episode, but this one failed to bring the drama. Maybe losing that acronym would be better for the world, who knows.

But what is the holiday season about? Love, peace and actual glee. So I commend the individual who named the episode “Glee Actually,” because it ironically made perfect sense.

Hope you aren’t lactose-intolerant, because this episode was definitely cheesy. I was half-expecting a mirrored version of Love Actually, but this did have originality. For an episode, the Glee cast is transported to a far-off universe where miracles do happen, and new beginnings do exist. Okay, it’s not a different universe, it’s just the typical holiday episode where everyone decides to play nice. Sorry to kill it. Let’s dig in, shall we? The five featured stories were:

Part of me felt offended on Artie’s (Kevin McHale) behalf. Just because you have a disability doesn’t mean you should be overlooked in a show. Perhaps they were trying to diminish stereotyping, but Artie isn’t really given any intense story lines.

Maybe the producers felt guilty? Wanted to purge their souls? Because the opening plot features Artie, fallen on the ice and unable to get up until some freshman girls help him. Powerless, he’s taken to the nurse’s office when Finn (Cory Monteith) sees his bruises.

When told to rest, a dream sequence is prompted. It’s a black-and-white vision where Artie can walk, and life is different. Rory (Damian McGinty) returns as his guardian angel (or a ghost from Christmas past, present, and future). This is how the world would have been if Artie never had that pivotal and impairing accident:

In a last-ditch effort to remind them of their cohesion and potential, dream-Artie attempts to reunite the Glee club… via a sewing class. He sings a number hoping it will prompt a favorable response, and instead Puck (Mark Salling), in his ignorant but classic style, dubs it “gay.”

Dejected yet introspective, Artie returns to his wheelchair. On waking, he looks peaceful, now knowing he is the Glee-glue binding everyone together.

2. Brittany and Sam get married because the world is ending

Cue the most irritating couple known to man (yes, even worse than Kim Kardashian and Kanye West!). Because of the Mayan calendar prediction, Brittany (Heather Morris) uses her savings to buy Rolexes, cars and many other extravagant items for her dear ones. Their faces are priceless, but not nearly as dumbfounded as mine.

You’d think Sam (Chord Overstreet) would jump in to tell her how outrageously she’s behaving, but he ends up affirming her and together they prepare for the last day of the world, Dec. 21. As a result, they end up getting married. When they awake on Dec. 22, they realize how foolish they were. Okay, maybe all they realized is that they lived through the “apocalypse” and that they still were married.

What do you think? Will they stay married? Their marriage ceremony wasn’t real, and Coach even verifies this, so will they find a way to make it official?

Jake (Jacob Artist) visits Puck in California, only to realize his “screenwriting” life is not as glamorous as portrayed (big surprise there). It’s probably the first time in a long time that we get to see a more sensitive side to Puck. Embarrassed and a little bit ashamed, Jake tells Puck to come back to Lima with him to try to find a way to reunite their families for Christmas.

What? You want to reunite the women who shared one man? Jake’s mom and Puck’s mom hate each other, and understandably so. But during a family dinner, the boys make their moms realize they all have one thing in common: The man they all loved walked out on all of them. And rather than hate each other, they should find a way to relate. And they do. It was an impressive story line, one that I found to be very realistic.

In the most adorable brotherly exchange, Puck tells Jake that he intends to move back to Lima so he can go back to pool-cleaning, but also continue writing screenplays. I’m a fan.

4. Kurt gets slapped with bad news, soothed by good news

Kurt is prepared to spend Christmas alone as Rachel goes on a cruise with her family. Then his dad shows up.

It doesn’t take a Glee veteran to know that Kurt’s dad is a stereotypical macho man: a sports-loving, beer-drinking manly man. And while he seems to accept his son, you’ll see interaction in this episode like never before. Over hot chocolate, Kurt’s dad reveals he has prostate cancer, but that it was caught early. Kurt handles it relatively okay. When they return home, they exchange gifts — with Kurt’s gift being at an address somewhere else.

Kurt goes to the address which leads him to a skating rink. Blaine (Darren Criss) appears and they have a romantic adventure on the ice. It was a sweet moment, and when they embrace, Kurt’s father looks at peace. Blaine had discussed how Kurt’s dad had paid for his plane ticket to come visit. On hearing the news of the cancer, Blaine promises Kurt he’ll look out for his dad. (Okay, that guy is a keeper — as long as he can keep it in his pants!)

In the last few moments of their plot, Blaine also drops that he’ll be applying to NYADA, which pleases Kurt. Looks like there’s more romance in store for these two, eh?

5. Sue takes a break from being Scrooge

While Sue (Jane Lynch) shows no restraint in verbal annihilation, her Secret Santa name proves to be an opportunity for her to show actual kindness. The name she picks? Mrs. Rose (Trish Rae Stahl), Marley’s (Melissa Benoist) mother. I expected her to purchase something mean-spirited, preying on her weight issue. Instead, Sue walks by during an emotional scene where Mrs. Rose discusses how they won’t be able to afford Christmas due to the expense of Marley’s bulimia therapy. Mrs. Rose’s devotion to her daughter, aided by Marley’s gratefulness, sparks a responsive chord in Sue’s heart.

She sells an expensive pine tree she’d intended to use as a Christmas tree (hilariously shaved to look like a bonsai tree) to a “luxury toothpick” company. She then takes the proceeds and leaves presents, a tree and extra cash in the Rose’s household. Yes, that also means she broke in. Classy.

When Becky (who helped with Sue’s efforts) is bribed with candy, Mrs. Rose finds out who the gracious contributor is. Even though Mrs. Rose tries to return the money, saying she couldn’t accept it, Sue is adamant she take it. And the Glee club performs a number for her in gratitude (even though she’d made it clear it wasn’t something she’d appreciate).

This story was my pick for the night.

A predictable but good episode

We all need holiday episodes. Cheesy or not, they remind us that there’s still hope whether on-screen or offscreen, and that spreading good cheer is contagious. They performed several Christmas carols and holiday songs, so make sure you check those out! Congratulations Glee, you actually managed to put me in a good mood.

What did you think of it?