It’s Christmastime in Mystic Falls and even vampires and werewolves get lonely like the rest of us. Their killing sprees and break-ups just couldn’t wait until after the holiday season. 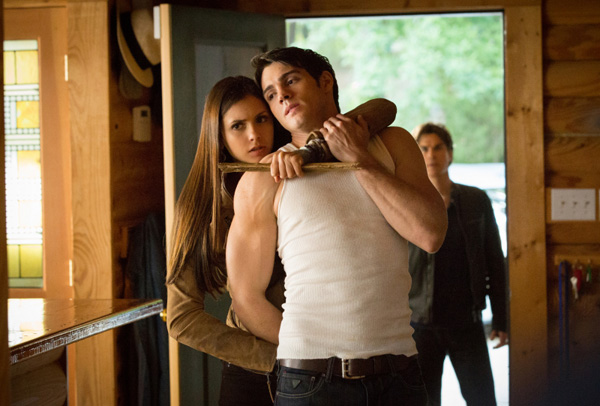 The torture continues this week on The Vampire Diaries as Damon (Ian Somerhalder), having landed the girl of his dreams, is too guilt-stricken to, well, seal the deal romantically. Instead, he follows her around like a lovesick puppy and dwells on his agonizing feelings for her. He likes to balance this with an equal amount of pushing Elena away. In this life or the next, that’s just confusing, man.

In a roundabout way to regain his long-lost love, Stefan (Paul Wesley) continues his quest to find the cure for vampires. Klaus (Joseph Morgan) actually admits to having the key ingredient: the infamous sword. Apparently he’s been hoarding this news all along, to the downfall of others. Like Jeremy becoming a deranged vampire hunter in order to find the cure or Tyler forfeiting his body to make room for Klaus to live in his and then bury him in concrete… that’s just how Klaus rolls.

Tyler is convinced his plan to destroy Klaus will work, but of course Caroline doesn’t want to see her hot boyfriend meet a mobster-style demise. She tells Stefan to get his hands on that sword, and fast. Tyler doesn’t give two cents about Stefan’s plan, and Caroline and Stefan are held captive by the hybrids so Tyler can take care of his business. Remember, Klaus is an evil genius. He catches on to Tyler’s plan and ruins everything. The hybrids, the cure and anyone in his path aren’t safe.

The holidays, while festive, are also a prime time for family drama, and it’s no different in Mystic Falls this year. Elena (Nina Dobrev) has the bright idea of meeting Jeremy (Steven R. McQueen) at a cabin and inviting the evil-intentioned Professor Shane to join them. Jeremy tries to kill her because, you know, he’s a vampire hunter these days. (Side note: Jeremy has no interest in killing Damon. Not all vampires are created equal.)

Professor Shane tries some dark magic/therapy with the siblings and it all sort of works out in the end when the vampire hunter is able to hug his undead sister instead of ripping her head off.

A few things you need to know

Hayley is trouble, and is working with Professor Shane. Klaus destroys Tyler’s pack and drowns Mayor Lockwood (WTF, mate? Klaus’ need for revenge goes deep if he has to go after someone’s mama). Even Rebekah got staked. And, in the most urgent and important news, Damon breaks the sire bond with Elena and “sets her free.” I’m still on team Elena. Their chemistry was off the charts and fun to watch. Maybe that’s because Nina and Ian are a couple in real life, but I enjoyed the change of pace! I wonder if her freedom will endure. I think she has stronger feelings for him, sired or not.

In the end, it’s a lonely Christmas for all. Elena and Damon are done and even Stefan doesn’t seem happy about it. Tyler is now a lone wolf and Klaus murdered half the cast and no one has the sword! Happy Holidays, folks! Hopefully the New Year brings some better news.