Hugh Jackman is on top of the world. In just one week, he received a Golden Globe and a SAG Award nomination. But today he also received a star on the Hollywood Walk of Fame. 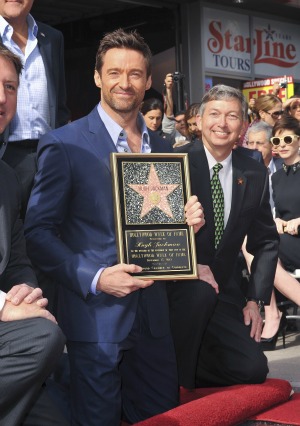 Hugh Jackman had a good day. He woke up to the news he had received a Golden Globe nomination for his part in Les Miserables, and just hours later he showed up to accept his very own star on the Hollywood Walk of Fame.

“It’s kind of a surreal day,” he told E! News. “I’ll probably always remember Thursday, December 13 and I think I’m either going straight from here to buy a lottery ticket or to a casino because it just feels like someone is looking down on me in a very nice way at this moment.”

His Les Mis co-stars Anne Hathaway and Amanda Seyfried showed up for the ceremony to congratulate him on the honor.

“I’m excited,” he said. “The star is right here outside where I got to host the Oscars and if the movie gets nominated (for an Oscar), it’ll be nice to get up there and show a little bit of the show to everybody.”

The actor joked about how he got to this place and said this day would be important to him for a while.

Jackman also received a nomination for a Best Actor Screen Actors Guild Award just the day before. He said his good fortune will not be wasted though. He expects the area where his star is to offer some much-needed therapy for kids.

“Ten years from now when they’re remembering all the things I did wrong, it’s gonna save a fortune in therapy,” he told E! “They can come here, graffiti it, stomp on it, spill their soda on it, whatever.”