It’s Hollywood’s favorite time of year – awards season! From shock to overwhelming gratitude, find out how celebrities reacted to their Golden Globe nominations. 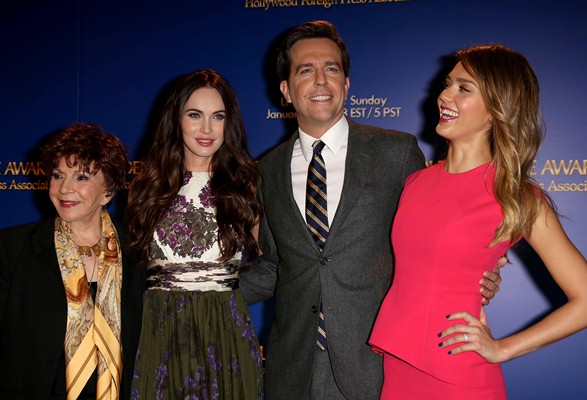 Christmas came early for the Hollywood elite on Thursday morning with the 2013 Golden Globe nominations. And we do mean early — hosts Megan Fox, Ed Helms, and Jessica Alba took the stage at The Beverly Hilton Hotel at 5:30 that morning to spread the good news.

Despite the early wake-up, it didn’t take long for the nominees to react via social media or statements to the press. Read on to find out what your fave TV and film stars had to say about their exciting news.

Anne Hathaway was nominated for Best Supporting Actress for her role in Les Misérables. She shared her happiness in a statement:

“What a great way to wake up! I couldn’t be happier or more grateful for this news. Congratulations to Hugh [Jackman] and everyone who worked on Les Miz for their contribution to the best picture nomination!!!”

“I want to thank the Hollywood Foreign Press Association for honoring Argo with five nominations. These nominations reflect the courage and determination of real life heroes in the U.S., Canada, Iran and across the globe.”

As for celebrating, Affleck told the Associated Press he’ll save that for later:

“To be honest, I’ll celebrate tomorrow when my wife gets home, because trying to do childcare by myself is very trying.”

Bradley Cooper was nominated for Best Actor in a Comedy or Musical. He shared his astonishment with the Hollywood Reporter:

“To see this film recognized by the HFPA is huge for us. And for me, personally, to be in a room with Bill Murray, Daniel Day-Lewis? Forget about it.”

Hayden Panettiere was nominated for Best Actress in a Supporting Role in a Series, Mini-Series or Motion Picture made for Television for her role on Nashville. She shared this celebratory tweet:

“I woke up to this news, cried and then made myself a grilled cheese. I am so honored! pic.twitter.com/DeswbdWC“

Jennifer Lawrence received a Golden Globe nod for her role in Silver Linings Playbook. She told MTV News about her early wake-up call:

“I had no idea [the Golden Globes nominations were Thursday]. My agent called me at 5:30 and I thought the set of my movie had burned down, or Josh [Hutcherson] had died or something. I didn’t realize! I was so tired!”

Julianne Moore was nominated for Best Actress in a Mini-series or Motion Picture made for Television for her role in Game Change. She told the Associated Press exactly where she was when she heard the good news:

“I’m in a van on my way to Queens to do 30 Rock. I heard the news this morning right before yoga. I was just about to shut off my phone. Unfortunately, I knew the nominations were being announced, so I was worried.”

Keith Urban earned a Golden Globe nod for For You, a song he co-wrote for Act of Valor. His wife, Nicole Kidman, is also a nominee. He told the Los Angeles Times what he did upon hearing the news:

“I called her [Kidman] immediately and told her how proud I was of her. We’re both looking forward to the show. I love going anywhere with her.”

Leonardo DiCaprio received a Golden Globe nomination for Best Supporting Actor for his work in Django Unchained. He issued this statement:

“I’m truly honored to be nominated by the Hollywood Foreign Press Association today. Django Unchained was a remarkable experience and I consider myself lucky to work with Quentin and the entire cast on the film. I’m particularly proud to be named alongside my fellow Django nominees.”

Keith Urban’s wife Nicole Kidman received two nominations, including Best Supporting Actress for The Paperboy and Best Actress in a Mini-series or Motion Picture made for Television for Hemingway & Gellhorn. She shared her surprise on Facebook:

“Can’t believe it! Thank you to all the actors who nominated me and especially to John Cusack and Zac Efron, who gave me so much. I am in Europe filming Grace Kelly and I was completely taken by surprise. Love & hugs, Nic xx”

Quentin Tarantino’s Django Unchained won’t be released until Dec. 25, but it’s already been nominated for three Golden Globes. He shared his excitement in this statement:

“It’s very gratifying to get this many nominations from the HFPA for a film I worked so hard on and am so passionate about. I look forward to having fun at the Golden Globes with my cast mates and fellow nominees.”

Steven Spielberg’s Lincoln leads the pack with seven Golden Globe nominations, including Best Picture, Drama. He shared his excitement in this written statement:

“Seven has never been a more lucky number than it is for me today. I was delighted to hear that the HFPA has chosen to recognize Daniel, Sally, Tommy, Tony Kushner, John Williams, Kathy Kennedy and me so generously. Bringing Lincoln to the screen has been the opportunity of a lifetime and a distinct privilege. The story is quintessentially American, but we hope it’s a movie that can speak to audiences worldwide. After all, Lincoln ended his most famous speech, as you hear at the end of our film, looking beyond national boundaries to justice and peace for all nations. That’s one reason why it’s especially meaningful for me that the Hollywood Foreign Press has honored us with these nominations.”

Taylor Swift’s Safe and Sound, featured on the Hunger Games soundtrack, was nominated for Best Original Song. She shared her special news on Twitter:

“Best birthday surprise EVER-just found out that Safe&Sound is nominated for a GOLDEN GLOBE!! Thank you @goldenglobes and HFPA! #hungergames.”

Tim Burton’s Frankenweenie was nominated for Best Animated Film. He shared this statement:

“I’m thrilled to be recognized by the HFPA. Frankenweenie is a very personal project for me and the nomination goes as much to the animators who labored frame by frame to bring this film to life.”

Stay tuned to find out which lucky celebs will take home the win. You won’t have to wait too long — the 70th Golden Globe Awards, hosted by Saturday Night Live alums Amy Poehler and Tina Fey, will air on Jan. 13, 2013, at 8/7c on NBC.