The couple’s relationship has moved fast. In one year, they have gone from dating to moving in together. But will the next step be happening sooner than we realized? 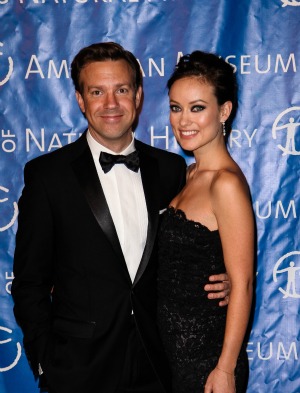 Jason Sudeikis and Olivia Wilde may be one of the cutest couples in Hollywood right now. So much so that it’s hard to believe they have only been together for a year. Wilde recently moved to New York to be with her boyfriend and it looks like things may have gotten really serious really fast.

According to RadarOnline, the couple is secretly engaged and plans to get married very soon. A source told the website that Sudeikis and Wilde were spotted in his hometown of Kansas City recently, with Wilde flashing an engagement ring.

“Everyone in town is buzzing about the wedding,” the source said. “They have already booked the venue and are in the process of finalizing the rest of the details.”

Talk about art imitating life. It sounds like Sudeikis’s storyline on 30 Rock, except this time the girl is coming with him. A wedding in the actor’s hometown would make sense.

“Jason is a hometown boy at heart, and he is super close to his family and all his friends there,” the source told RadarOnline. “It has always been his dream to get married back in Kansas City.”

Wilde’s rep told The Huffington Post that the couple is not engaged, but they have never been shy about sharing their feelings about each other (publicly). Wilde recently told Glamour magazine that the couple is “blissfully, hopefully, wildly in love.”

The actress added that every area of their relationship is going in the right direction.

Wilde’s publicist also added to RadarOnline that the couple is “very happy together but they are just not engaged.”

Meanwhile, Wilde’s multi-million-dollar LA area home is up for sale, and Wilde is happily living with Sudeikis in New York. And maybe someday the couple will even work together.

“We talk about it all the time. We’re constantly doing bits together,” she recently told USA Today. “One day, someone will turn a camera on that. It would be a good movie.”