The Twilight starlet shows a much more mature side in her new movie, which she took a month to prepare for. 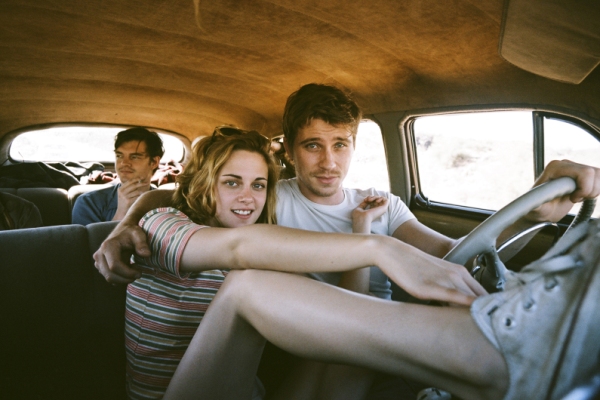 Kristen Stewart is all grown up in her new movie On the Road. The Twilight starlet gets naked, does drugs and has threesomes in her latest film, which is an adaptation of Jack Kerouac’s famous novel.

But her co-star Sam Riley said shooting the sexy scenes with K-Stew, in which she’s totally topless, wasn’t exactly a turn-on. “It’s a strange thing… I was pretty uncomfortable,” he told SheKnows yesterday in NYC. “She was 19; I was nearly 30, married… we’re mates. You just sort of do it as quickly as possible, unlike in real life. I don’t really see a future for me in erotics.”

Kristen plays Garrett Hedlund’s girlfriend Marylou in the movie, and their chemistry evolved naturally since they spent an entire month together before filming. “I think it was just being around each other for the four weeks before filming,” Garrett explained to SheKnows. “We were all in the same room all day, every day. It was me and Sam and Kristen in this apartment with Walter [Salles, the director], listening to jazz, reading; it was one big study hall. Also, she’s not a hard one to get along with, either. She was so dedicated to this.”

Director Walter Salles echoed the same sentiment. “She was so knowledgeable about the book,” he told SheKnows. “She had such an in-depth understanding about the book and the character that I invited her to do the film if it was ever to be made. It took us five years to get the financing, but during all those years, she remained tied to the project and wanting to do it, and that says a lot about her.”

Kristen’s not the only one showing skin in On the Road. Garrett is naked during many scenes in the movie, too. “I haven’t seen my brother naked as often as I saw Garrett in those six months! It’s funny, obviously,” Sam said.

“We just got really drunk beforehand,” Garrett joked on how he handled his on-screen nudity. “Everybody asks, ‘Was it awkward being naked in front of Sam or Kristen?’ But they’re the least of the worries. It’s about the man with the mustache holding the sound boom. That’s more awkward.”

Sam, who’s British and lives in Berlin, said he wasn’t familiar with the Twilight saga before meeting Kristen, but she attempted to explain it to him. “Kristen tried to fill [in] what the plot was for the one that’s just come out now and it sounded bonkers!” he laughed. “It’s like, ‘He’s a vampire and he’s a werewolf and I get pregnant with him because we were dancing and then the child grows at enormous rates and it comes out almost toddler age.’ I thought ‘This is very unusual children’s entertainment.'”

One thing’s for certain: On the Road is definitely for adult audiences! The movie hits theaters Dec. 21.