Photos snapped at the opening of the Spice Girls’ new London musical prove that Victoria and David’s three boys are growing up just as pretty as their parents. 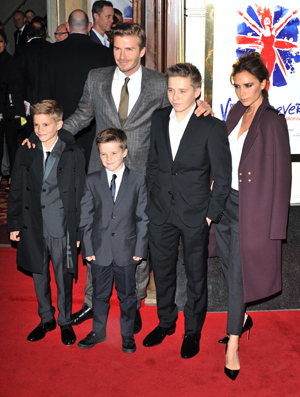 Good looks aren’t automatically passed on from parent to child, but the Beckham kids sure won the jackpot.

Red carpet photos of the Beckham family taken at the premiere of Viva Forever!, a.k.a. “the Spice Girls musical,” prove that Posh and Becks’ three boys are growing up to be mini-GQ guys just like their gorgeous pop.

At 13, Brooklyn Beckham is almost as dapper as dad David Beckham, clad in a skinny suit and an open-collared white shirt.

Romeo Beckham, 10, either has a hair stylist or had Mom and Dad help him with the gel. And little Cruz Beckham, 7, ably sports his suit, though he swapped out dress shoes for sneakers, as befits a wiggly second-grader.

Little Harper Seven Beckham, who’s just 1, didn’t make an appearance. Home in bed, no doubt. She’ll have years to learn to pose for the cameras with one foot slightly in front of the other, as Victoria Beckham demonstrates in this image.

Viva Forever!, which is not actually about the Spice Girls, but uses Spice Girls songs throughout, didn’t fare quite as well as the Beckham clan did.

The reviewer for The Telegraph gave the show one star and opened his review by mocking, “I’ll tell you what I wanted, what I really really wanted — I wanted this terrible show to stop.”

“The Spice Girls may have been many things, but the authors of a back catalogue packed with deathless pop classics is not among them: they sold records on the basis of the members’ perceived personalities rather than the quality of the songs they sang,” writes Guardian critic Alexis Petridis.

Also, “the lyrics are required to drive the action on, and the lyrics of Spice Girls songs are appalling, a state of affairs underlined when they are sung in the carefully enunciated style of musical theatre: ‘Let the flashbulb pierce your veins’.”

The Spice Girls themselves all attended the premiere at London’s Piccadilly Theatre, and afterwards praised the show: “It was [expletive] great!” the Associated Press quotes Melanie Brown (Scary Spice) as saying.

Melanie Chisholm, a.k.a. Sporty Spice, said, “If people criticize it, we don’t care — because we love it.”

Apparently, the crowd agreed: The Guardian‘s Petridis said that “judging by the crowds of thirty something ladies leaving the theatre singing Stop and Say You’ll Be There, Viva Forever! is critic-proof.”