Rumors of trouble in Bethenny Frankel and Jason Hoppy’s marriage are making the rounds again. 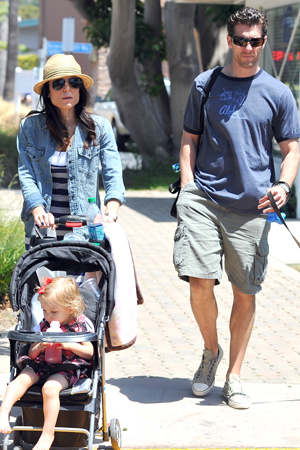 Well, this sucks: Reality star/talk show host/Skinnygirl mogul Bethenny Frankel is reportedly on the last legs of her marriage to husband Jason Hoppy.

That is, if an unnamed source is to be believed.

Are you a Skinnygirl? Bethenny launches shapewear line >>

“It’s pretty much over between Bethenny and Jason,” the source told RadarOnline of the couple’s three-year marriage. “They are already living separate lives.”

“She purposely spent Thanksgiving without him, bringing Bryn to Miami. He wasn’t happy about it, to say the least,” the source added.

This isn’t the first time rumors have dogged the couple. Earlier this year, spies claimed the former Real Housewives of New York star was cheating on Hoppy with her Skinnygirl business partner, Matt Hesse.

But, it seemed like all the rumors were to promote her new talk show, Bethenny — especially since one of the first things she did was tell fans to “watch the show” to find out the status of her marriage.

“I put it all out there on my show,” Frankel told the talk show audience in June. “If it’s out there I’ll tell you. I’m in a good marriage. We have issues and we’re not perfect, but, we work on it every day. We’re committed.”

Now? It’s a different story, according to the Radar source.

“She doesn’t seem to be too upset,” the source said. “She is really focused on her career and her product line right now, so it sort of consumes her, which is probably why the marriage starting falling apart in the first place.”