It all looks so pretty on television, but here is what really happened inside Thursday morning’s Golden Globes nominations at the Beverly Hilton. 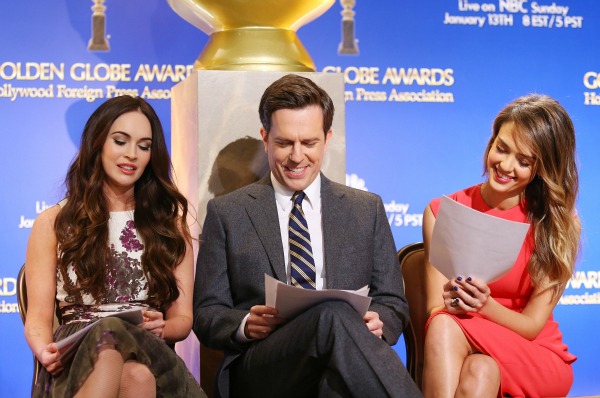 Most people watch the Golden Globes nominations from the comfort of their own home as they get ready for work in the morning. What the TV viewing audience misses is a whole world of reporters, noise, and funny moments not captured by the cameras in the room.

SheKnows was there on Thursday morning to give you the Top 5 things you missed inside the Golden Globes nominations room.

Even though it is an early morning, the reporters in the room all want a glimpse of the nominations host. This year it was Megan Fox, Jessica Alba, and The Office‘s Ed Helms taking turns on the podium to read off the nominees. They each had their funny moment of flubbing their lines in the untelevised portion of the nominations.

First, Fox giggled as she stumbled over Anna Karenina, which certainly isn’t the easiest word to pronounce at 5:30 a.m. Alba thought she had read the wrong category at the wrong time, which led to a few moments of shuffling papers before everyone realized she was right on track. Finally, Helms relished having to pronounce Les Misérables in the best French accent ever. He reassured the press, “That’s the correct pronunciation,” to much laughter in the room.

The Golden Globes has always been known as the “party of the year” in Hollywood because alcohol is served during the show. Thursday morning was no different as Moet, the official champagne sponsor of the show, served up the bubbly to the media during the entire proceedings. The hosts also toasted next to a tower of champagne bottles after the televised event to get in a good promotional plug. Like every good party, the company also sent everyone home with a gift bag with a little champagne for later.

It may seem pretty sedate in the room while the nominations are being read, but the viewers at home miss all of the gasps, applause, and murmurs at some of the surprises and snubs. Several of the celebrities who received applause for their nominations included Jodie Foster, Amy Poehler, and Ang Lee. On the flip side, there were murmurs rustling through the Beverly Hilton ballroom when Quentin Tarantino, Richard Gere, and Emily Blunt names were read. Yes, Hollywood is just like high school.

If you want to feel a bit frumpy at 5:30 a.m., stand in the same room as actresses Megan Fox and Jessica Alba. These two women are both mothers and they were rocking their dresses in the wee hours, looking fit and fabulous. Alba is the mother of two daughters while Fox had her first son almost three months ago. Even with hair and makeup artists to help finish their look, they are clearly working very hard to maintain their fitness levels.

Even with the ladies dressed in designer duds, including Alba’s Christian Louboutin shoes this morning, it was also nice to see the human moments, too. Just moments after the nominations were finished and the press photos were completed, Fox was spotted in the lobby of the Beverly Hilton still in her dress, but she had kicked off her heels and slipped on the Ugg Boots. It proves that women suffer for fashion, but we always return to comfort behind closed doors.