Moody British rocker Morrissey says Kate Middleton and the rest of the royal family have blood on their hands after a nurse embroiled in a radio prank killed herself. 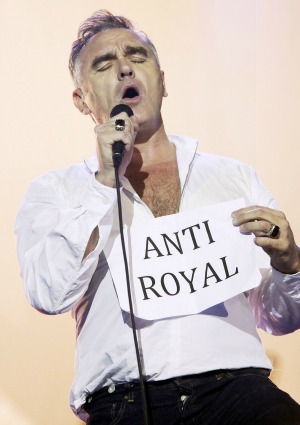 Perpetual grouch Morrissey may have gone too far this time. The British rocker, who some say may have gone off his rocker, told a news show that Kate Middleton herself is squarely to blame for the death of nurse Jacintha Saldanha after a radio prank gone wrong.

“The arrogance of the British royals is staggering and why it’s allowed to be I really don’t know.”

“It wasn’t because of two DJs in Australia that this woman took her own life — it was the pressure around her and we forget about that,” Morrissey, a longtime detractor of the monarchy, continued. “And the royals are exonerated as always.”

“Does she have a health condition? Is it anorexia or is it pregnancy? What is the we don’t know,” he said. “Morning sickness, already? So much hoo haw and suddenly bright as a button as soon as this poor woman dies she’s out of hospital? It doesn’t ring true.”

Time for a Morrissey fact check. Did Middleton really ignore the woman’s death?

No. In fact, Prince William and Duchess Catherine issued a very sympathetic statement through Clarence House upon learning of the suicide, saying, “Their Royal Highnesses were looked after so wonderfully well at all times by everybody at King Edward VII Hospital, and their thoughts and prayers are with Jacintha Saldanha’s family, friends and colleagues at this very sad time.”

As for Morrissey’s assertion that Middleton was simply suffering from common morning sickness, that also is not accurate. The future Queen has been diagnosed with hyperemesis gravidarum, a serious medical condition that can cause dehydration and even death to the mother and fetus if left untreated.

Sorry, Morrissey. You’ll have to find another reason to hate Kate.