Does Russell Crowe have a new girlfriend? Rumors that the in-demand actor has begun a new relationship have hit the press, causing the Les Mis star to tweet his frustrations. 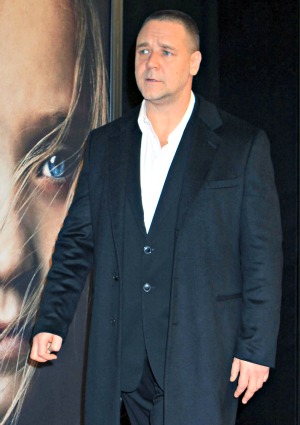 Russell Crowe is no stranger to the gossip mill, yet the latest round of reports that claim he’s hooking up with Billy Joel’s ex-wife seem to have struck a sore spot.

Despite claims that the actor is now dating Katie Lee, who divorced the 63-year-old singer in 2009, it appears Russell Crowe is hell-bent on wrapping up his work abroad and heading home to reunite his family.

Russell Crowe’s ego and schedule are to blame >>

The father of 6-year-old son Tennyson and son Charles, who will turn 9 on Dec. 21, tweeted his frustrations with his work schedule and the dating gossip on Wednesday.

“As soon as I finish this job & can get home, my priority is to try to bring my family back together,” wrote the Les Miserables actor, who is currently filming A Winter’s Tale in New York. “These latest reports are false & cruel.”

The Australian actor is also quoted as venting earlier, “Starting on another film set tomorrow. I need to go home & be with my children. Cannot believe how fkd (f***ed) up my schedule has become this year.”

Russell Crowe’s vow to reunite his family seems a change of heart for the the 48-year-old, who announced a separation from wife Danielle Spencer in October after nine years of marriage.

Here’s hoping she’s not a follower of the New York Post, which claims the actor and Katie Lee were seen snuggled up by a cozy fireplace in a New York City hotel in the wee hours of Sunday morning.

“They seemed to be in an intense, flirtatious conversation,” a source told the publication. “They looked really into each other. Katie was still at the hotel Sunday afternoon.”

Do you think Russell Crowe and Danielle Spencer should reunite?