Pippa Middleton’s first book has become a phenomenal flop. Spoofing herself, the sister of Kate Middleton makes plans for a sequel that will surely be a best-seller! 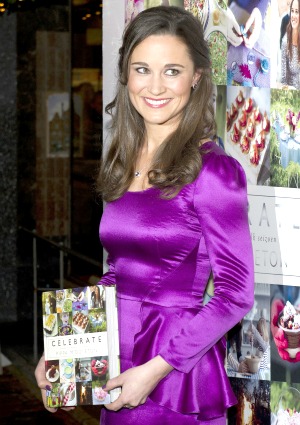 Rather than let others have all the fun, Pippa Middleton has taken to spoofing herself. The new author, whose debut book Celebrate has sold shockingly few copies, manages to have a laugh at her own expense in a guest editorial for the British weekly The Spectator.

“I have been much teased for my book, Celebrate. Lots of journalists are saying that my advice is glaringly obvious,” Pippa Middleton writes. “It’s all good fun, I know, and I realise that authors ought to take criticism on the chin.

“But in my defence, let me say this: Celebrate is meant to be a guide to party planning and, as such, it has to cover the basics. If I were to write a cookery book, for instance, I would be compelled to say that, to make an omelette, you have to break at least one egg.”

Mocking herself for that oh-so-obvious advice, the 29-year-old shared these additional holiday-themed tidbits:

“Choose, if you can, a Christmas-themed menu. A turkey, for example, can be perfect for large gatherings.

Don’t not invite any members of staff, as this can cause offence.

Keep speeches brief and cheerful: Christmas is not a time to talk about redundancies.”

So simplistic is Pippa Middleton’s advice in Celebrate, that a Twitter account, @PippaTips, was started purely to poke fun at the sister of Kate Middleton.

While a previous message was along the lines of, “#PippaTip: avoid early mornings by not waking up too early,” today’s is much friendlier. Responding to Pippa’s spoof, a tweet reads, “#PippaTip: the ability poke fun at oneself is a good way to make even meanie old parody writers fond of you *applauds*”

Pippa Middleton gets to the “bottom” of it >>

Yes indeed, Pippa Middleton’s sense of humor about herself seems to be winning over fans left and right. Though she joked, “Maybe I should write a sequel and call it Bottoms Up. Now that could be a best-seller,” we think a grace under fire book would be marvelous. Certainly, Ms. Pippa has plenty more stories to tell about the press by the point!

What type of book would you like to see Pippa Middleton write?