Sarah Jessica Parker’s long ride home to New York got even longer after a member of her entourage stole a pair of sunglasses at the Oslo, Norway, airport. 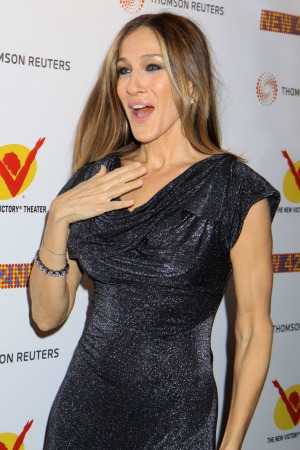 Sarah Jessica Parker was just trying to get home to her family when her entire entourage was stopped at the Oslo, Norway, airport. It turns out there was a thief among them.

Parker, who was in town for the 2012 Nobel Peace Prize Concert, was on her way home to the US when the Oslo airport police pulled her group aside. One member of the actress’s entourage had stolen a pair of sunglasses.

The matter was easily cleared up when the guilty party admitted to the theft.

A spokesperson from the Oslo airport, who spoke with E! News, said, “I can confirm a member of Sarah Jessica Parker’s entourage was blocked from getting on a plane for stealing sunglasses. She accepted the fine of $8,000 krones ($1,398.46 US) and was let go.”

Earlier on Wednesday, it was erroneously reported that the accused was the Sex and the City star’s assistant. That rumor turned out to be false when the Nobel Institute issued a statement that identified the member of Parker’s party by trade.

The rep said, “This individual is not an employee of and has no connection to the Nobel Institute, which awards the Peace Prize and presents the Peace Prize Concert. She is a freelance make-up artist who was contracted by an outside agency that specializes in that area.”

The group did miss their flight back to the States, but they were able to catch a later flight. However, the make-up artist is probably looking for a new job right now.