Jessica Simpson continues to dodge the paparazzi with big bags in front of her midsection as she hides her possible second pregnancy. 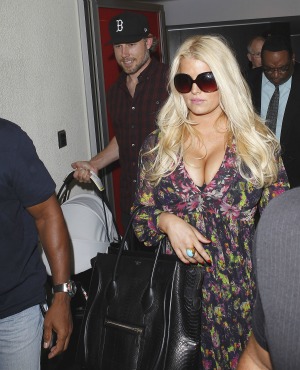 The Jessica Simpson baby bump watch continues as Us Weekly and numerous sources continue to blab about the Weight Watchers spokeswoman’s second pregnancy. While everyone is busy blabbing Simpson’s news, the Fashion Star judge has remained oddly silent.

During her first pregnancy, the fashionista was happy to share every moment of her pregnancy from cravings to flatulence. Her continued silence most likely means that the star is still in her first trimester and she is keeping it all under wraps until the second trimester.

The paparazzi are hounding the star right now in the hope of catching that baby bump that Hollywood loves so much. However, Simpson is using all the tricks of the trade from wearing slimming black to hiding a big purse in front of her stomach. If that doesn’t work, carrying 7-month-old baby girl, Maxwell, or a few holiday shopping bags should do the trick.

Another important fact, noted by a source at Us Weekly, is that the 32-year-old is avoiding alcohol. At her pal CaCee Cobb’s birthday at the Polo Lounge, a diner noted, “Jessica ordered a grilled cheese sandwich with onion rings,” while the rest of the table celebrated with a round of cocktails.

Reportedly, she had her server take a note of her beverage order with, “Guess what? I’m drinking ginger ale!”

Is that to quell a nauseous tummy that seems to be going around with every pregnant celebrity these days?

Only time will tell, but time is running out as the media clocks her every move until the big announcement from Simpson and her fiancé, Eric Johnson.