Modern Family star, Ariel Winter, learned her fate on Wednesday in the ongoing custody case between her older sister and her parents. 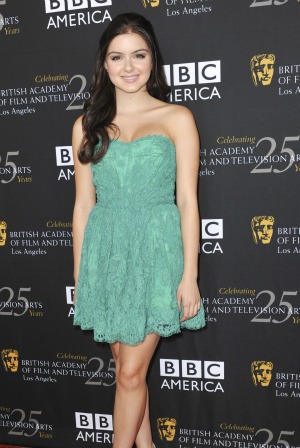 It looks like Ariel Winter can breathe a sigh of relief for now as details of her custody arrangement were settled before a trial was set to begin on Wednesday.

The outcome of the agreement allows the 14-year-old to stay in the care of her older sister, Shanelle Gray. Both sisters were in the courtroom today and, according to Yahoo, they held hands throughout the entire ordeal.

Another significant outcome of today’s proceedings involved the young star’s finances. The judge in the case decided to give temporary control to Winter’s dad, Glenn Workman. Gray never asked for any interest in her sister’s finances, she only asked for the temporary custody that she was granted.

The biggest loser in this case is Winter’s mother, Chrisoula Workman. She not only lost custody of her daughter after child protective services found evidence of emotional abuse, but she lost control of Winter’s acting career.

The settlement makes it clear that, “Chrisoula Workman shall have no contact with nor in any way interfere with Ariel Winter Workman’s professional relationships and business contacts.”

Superior Court Judge Michael Levanas is also making all involved parties go to family counseling to work out some of the issues. It is interesting to note that the agreement expects huge changes in the family dynamic to happen before the Modern Family actress is returned to her parents.

The agreement states, “The parties acknowledge that there is no assurance that Ariel will return to the home of either or both parents.”

Winter’s parents are currently separated and not living together.

Chrisoula Workman was visibly upset by the proceedings and left the courtroom in tears accompanied by her estranged husband.

The good news is that the judge seems pleased with the progress in the case. He said, “I do believe things are going to get better.”