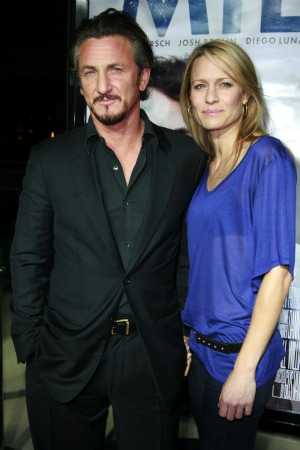 Sean Penn has been divorced from his second wife Robin Wright for over two years now, and he is just now starting to talk about it. He appears in the January 2013 issue of Esquire and shares his not-so-sunny thoughts on marriage.

“There is no shame in my saying that we all want to be loved by someone,” he said. “As I look back over my life in romance, I don’t feel I’ve ever had that. I have been the only one that was unaware of the fraud in a few of these circumstances blindly.”

The couple was married from 1996 to 2010 and had two children. But for Penn, he feels he didn’t understand how she felt until they were divorced.

“When you get divorced, all the truths that come out, you sit there and you go, What the f*** was I doing? What was I doing believing that this person was invested in this way?” he told Esquire. “Which is a fantastically strong humiliation in the best sense. It can make somebody very bitter and very hard and closed off, but I find it does the opposite to me.”

However, Penn never actually mentions Wright’s name, and he has been married twice. It could be just as likely he’s talking as much about his first wife Madonna as he is about Wright.

After the divorce in 2010, Wright and Penn’s son Hopper was involved in a skateboarding accident, which he later recovered from. The recovery made Penn think about things he hadn’t in a while.

“I thought, ‘Wow, I can actually go on a date,'” he said. “And so I go out and I strike out four nights in a row, drinking at a bar and ending up home, you know, drunk. And on the fourth day I said, ‘I could just go sit in the middle of the bed and watch TV at four in the afternoon, too. I don’t have anything.'”

But the newfound free time on his hands led to his next project.

“So I turned on the TV and there was this earthquake in Haiti,” he said.

Penn worked on the cause actively for the next few years. The actor next stars in Gangster Squad, set to come out in 2013.