This is random: Paul McCartney is reportedly set to join Nirvana’s Dave Grohl and Krist Novoselic at the Hurricane Sandy benefit concert on Wednesday night. 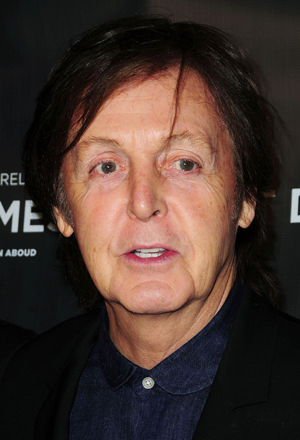 Paul McCartney might be channeling the late, great Kurt Cobain on Wednesday night — that is, if you believe a report from UK talboid The Sun.

The Beatles superstar has apparently been working with Nirvana bandmates Dave Grohl and Krist Novoselic and the idea came up during one of those sessions.

“I didn’t really know who they were,” he said of Nirvana. “They are saying how good it is to be back together. I said ‘Whoa? You guys haven’t played together for all that time?’ And somebody whispered to me ‘That’s Nirvana. You’re Kurt.’ I couldn’t believe it.”

The organizers behind the 12-12-12 benefit concert — scheduled for Wednesday night at Madison Square Garden — wouldn’t comment on the rumors and advised people to tune in and find out.

And if McCartney doesn’t show up to do his best Cobain impression? Well, the Hurricane Sandy Benefit concert will still be pretty entertaining. The lineup is set to include everyone from Jay-Z and Kanye West to Bruce Springsteen, Bon Jovi, Roger Waters and Alicia Keys.

All money raised will benefit the Robin Hood Fund — and organizers like Jon Bon Jovi hope it does more than a little good for the victims affected by October’s storm.

“It was hard to see your hometown devastated like this,” the New Jersey native said after the devastation hit the east coast. “My grammar school turned into a shelter, people’s homes gone and them saying to me, ‘We are homeless, we never intended to be homeless.’ These are hard-working, blue-collar people.”