Stars Glenn Close and Nick Nolte have signed on to Always On My Mind, a drama about a former rock star, his wife, and his disease.

Related story Malin Akerman doubles up on the good news 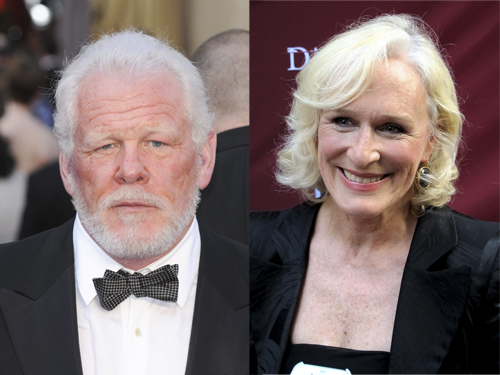 It’s easy to picture Nick Nolte, the subject of perhaps the most disheveled celebrity mug shot of all time, as a washed-up something-or-other. But Nolte as a rock god? That takes imagination.

Fans will have to exercise theirs when Always On My Mind, a drama about a couple dealing with Alzheimer’s, hits the screen.

Sounds like a depressing subject for a movie: Rock star (Nolte) fails to die young and pretty, spends his golden years developing Alzheimer’s while his wife (Glenn Close) picks up the pieces of his errant existence.

But Always On My Mind is written and will be directed by Chris D’Arienzo, responsible for both the wonderful Broadway musical Rock of Ages and its awful film adaptation, Rock of Ages.

So Always On My Mind holds unusual interest for rock fans, as D’Arienzo is so adept at writing about the music business. Rock of Ages (the musical) continues to tour, and was nominated for multiple Tonys.

Rock of Ages (the movie) didn’t perform as well, grossing a pathetic $56 million worldwide, according to Box Office Mojo. The movie’s production budget was $75 million.

That despite a shirtless Tom Cruise and Alec Baldwin in a wig that must have weighed 80 pounds.

Both Nolte and Close are having career upswings: Close connected with audiences on television’s Damages as well as at the movies with the drama Albert Nobbs.

Nolte will appear in the major release Gangster Squad with Emma Stone, Ryan Gosling and Sean Penn on January 11. He also has a role in the Jason Statham crime thriller Parker, due March 8.

But to us, he’ll always be the star of one of the most hilarious mug shots ever. Go ahead, click on that link just above this. Then picture that guy onstage with a guitar. Hee hee hee.