It’s been a rocky road for Drew Barrymore. It looks like she finally found someone to make her happy, though! Check out her precious daughter, Olive! 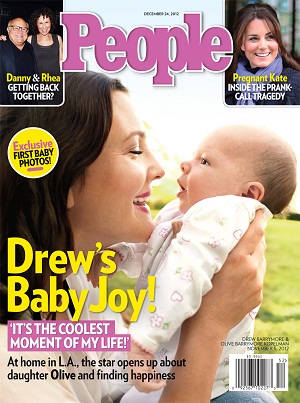 “I really wanted a wonderful traditional home for my kid,” Drew Barrymore tells People for this week’s cover story.

A traditional family situation was far from how Drew Barrymore was raised. The beautiful actress has had her various struggles — relationship, substance, familial and otherwise — broadcast to the world almost since she shuffled on screen as the sleepy little sister in Steven Spielberg’s E.T. the Extra-Terrestrial from 1982.

After dating quite a few big name actors and following a relatively lengthy relationship with Justin Long (He’s Just Not That Into You, Dodgeball), Barrymore met art consultant Will Kopelman. They married last June and welcomed baby daughter, Olive, into the world this September.

Has raising Olive been a cakewalk thus far? Not quite. Without anyone to offer her much guidance, Drew was probably even more overwhelmed by the resposibility than most new mothers.

“You have the highest highs and yet you’re facing the biggest fear of, ‘How do I keep someone alive?'”

She and Kopelman have done a great job, so far. They’ve already created their first family tradition in an effort to make sweet baby Olive smile. Apparently, all it takes is a duet of Singin’ in the Rain‘s “Good Morning” from mom and dad to put a smile on their daughter’s face. (You know, while we aren’t suggesting Hollywood remake the 1952 classic musical, if they do: We think Drew would make an excellent Debbie Reynolds!)

“It’s like the biggest crush I’ve ever had in my life!”

For photos of baby Olive and more of Barrymore’s interview, pick up this week’s issue of People, available on Friday.