Remember in 2009, when Chucky Sheen took some liberties with the definition of Christmas fruit cake and attacked then-wife Brooke Mueller with a knife? Not to be outdone by himself, Sheen followed that dysfunctional holiday with talk of tiger blood, winning, and how he doesn’t believe in rehab (can we get a “duh?”). Has Sheen been visited by the Ghost of Christmas Get-Your-S***-Together-or-Else? 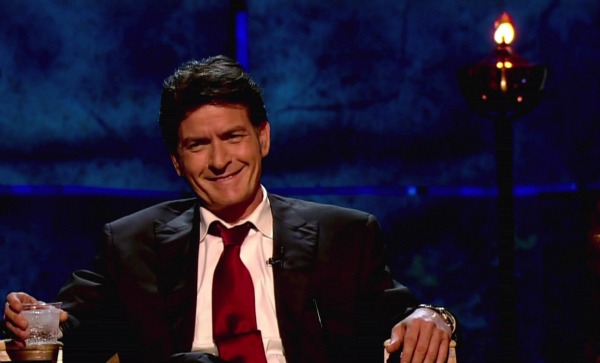 Back in July, Charlie Sheen pledged to give 1 percent of the profits from his Anger Management earnings to the United Service Organizations. This will go down in history as the largest contribution from a single donor to date. And yes, at first we were — what’s the word — oh yes, super freakin’ skeptical. After all, Sheen seemed to be in the midst of another downward spiral and was in a very public pissing match with Chuck Lorre, creator of Two and a Half Men. Most of us viewed a donation of his Anger Management earnings as a bid to beat Lorre in the ratings race. But in the month of December, Sheen followed up this generous publicity stunt with…

100K to Uncle Sam on behalf of Lindsay Lohan

What’s that saying? Birds of a feather pay each other’s tax bills? Or something like that. Chuckles must have seen a bit of himself in the public train-wreck that is Lindsay Lohan when he decided to hook his Scary Movie 5 sister up with $100,000 to help defray her tax bill to the IRS (which is in excess of $200,000). Sheen has publicly confirmed his generous gesture, saying he’s yet to receive a thank-you. Hey Sheen, send us $100,000 and we’ll air-drop thank-you’s over Los Angeles and change the Hollywood sign to read “thank you” for a day.

OK, the two aforementioned acts of generosity are noble, but by their very nature, open to speculation concerning Sheen’s motives. But now he’s donated $75,000 to a 10-year-old girl with a rare childhood cancer? Even the harshest of cynics can’t criticize this. Sheen’s stunt double also kicked in $25,000. No matter what kind of spin you try to put on this, the bottom line is Jasmine Faulk’s family is going to have a much better Christmas thanks to St. Charlie and his stunt double. Charlie Sheen is either in the midst of a Robert Downey-like comeback or he’s been told he has six months to live and is giving away all his earthly possessions. Either way, regardless of how much we’ve made fun of Sheen in the past couple of years for his public antics, this earns him a big, fat high-five. Maybe he does have tiger blood after all.

From one baby mama to another

It seems the Christmas spirit is rubbing off on all members of Charlie’s immediate circle. First, his stunt double kicks in on the cancer donation, and now Denise Richards is welcoming Charlie’s twins from Brooke Mueller into her home for the holidays. Since Mama Mueller is taking rehab for another spin, Denise has graciously offered to help care for her children’s half-siblings. After all the public humiliation Sheen has subjected Richards to, that is right decent of her. Maybe she knows something about Charlie (something good, I mean) that the rest of us don’t know… or maybe she just feels sorry for the tots. Either way, the Sheen crew has redeemed themselves for the time being. Let’s see what Chuck has in store for us in 2013…