Babs has already announced eight of her 10 Most Fascinating People this year. Who will she add to the list tonight during her TV special? 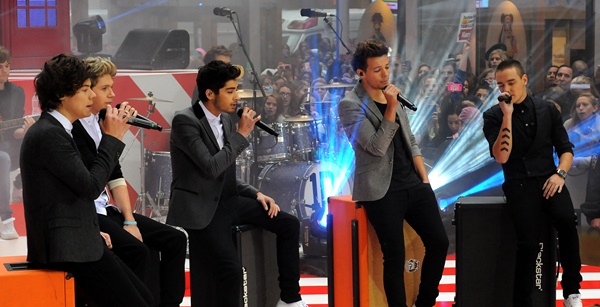 From Hillary Rodham Clinton to One Direction to Honey Boo Boo, Barbara Walters has once again pulled together a diverse group of celebrities, politicians, athletes and pop culture figures to create her list of the 10 Most Fascinating People of 2012. (Did we just write Hillary Clinton and Honey Boo Boo in the same sentence? Yep, unfortunately, we did.)

Babs has been broadcasting her annual list since 1993, when the most fascinating person honor was bestowed upon then-First Lady Hillary Clinton, who returned to the list again in 2003 and now in 2012.

Tonight, Walters will release the final two additions to her list of 10, usually leaving her top pick for the very end of the show.

So, what exactly makes her first eight selections so fascinating? Or, is Babs just easily fascinated? You be the judge!

The talented actor-turned-director was apparently quite fascinating in 2003, when he was first included in Walters’ list. That was the year that the first version of “Bennifer” was still alive and well, and the unfortunate movie that is Gigli happened. Luckily for Affleck, a lot has changed since then. There will probably be plenty of chatter about his growing family and his highly acclaimed film, Argo.

She may be tiny, but Gabby Douglas has done more in her first 16 years than many people do in a lifetime. The skilled gymnast captivated the world at the London Olympics with her strength and precision, and has continued to reel us in with her mature outlook on life. The gold medalist can also add author to her growing resume with the release of her first book, Grace, Gold & Glory: My Leap of Faith. Luckily for us, she also plans to go for the gold again in Rio in 2016.

You know you’ve made it big when you’re being spoofed on Saturday Night Live. If that’s the case, then New Jersey Governor Chris Christie has definitely made it. Christie was first thrust into the spotlight during the aftermath of Hurricane Sandy as he assessed the monumental damage to his state. Aside from his leadership, Christie became well known for his black fleece sweatshirt, prompting SNL to poke fun at his favorite piece of clothing.

The Secretary of State is once again making her way onto Walter’s annual list. This will mark Clinton’s third appearance on the show, but her first time appearing as Secretary of State, a role she has held since 2009. During the past three years, Clinton has already set records for being the most-traveled secretary for time in office. One topic Babs is sure to bring up: a possible 2016 presidential run.

The latest addition to the 10 Most Fascinating People list is also the most controversial. Honey Boo Boo, a.k.a. Alana Thompson, is the star of the hit reality show, Here Comes Honey Boo Boo. Whether you love her or hate her, one thing’s for sure: this pint-sized beauty queen is a ratings sensation. Which, we presume, is exactly what Walters had in mind when selecting her to join the list.

Barbara’s going crazy, crazy crazy over the hottest boy band on the globe, One Direction. The band recently made their American TV debut on the TODAY Show, breaking the show’s record with 15,000 fans in attendance. That same day, the hotties released their sophomore album, Take Me Home, and announced that they’ll be hitting the big screen in their own 3-D movie next summer. We think Babs has a crush!

You probably know him best as the creative mind behind Family Guy, but MacFarlane has quite a lengthy resume. The actor, animator, comedian, writer, singer, producer and director (is there anything he doesn’t do?!) is also set to host the 85th Academy Awards in February, which should be interesting — he’s known for pushing the boundaries with some of his work. In fact, Family Guy has received criticism for some of its rather controversial content. Which, of course, makes for a great Babs interview.

And then there were two. Who do you think will be added to this (very random) list tonight? Here are a few of our oh-so-educated guesses:

Aside from her career success and musical brilliance, she has dated 13 guys in four years, which is reason enough for us to add Taylor to the list!

Who doesn’t know how to do the “Gangnam Style” dance by now? South Korean musician Psy (real name: Park Jae-sang) started a pop culture phenomenon when his single hit YouTube. The video has been viewed more than 935 million times, making it the site’s most-watched video. (Sorry, Biebs!) Plus, there’s the controversy factor: Psy sang anti-American lyrics in a rap song he performed back in 2004, which he has since apologized for.

K-Stew has had quite a year. Some might even call it fascinating! For starters, the final installment of the Twilight series was released following her very public cheating on R-Patz with her married director, resulting in Twi-hard mayhem. Drama, drama, drama!

After winning a tight race, President Obama is back for another four years. We’re sure Babs would have plenty to ask him about that first debate performance (cringe!) and how he plans to bridge the party gap during his next term.