Les Miserables actress Anne Hathaway proves that you can have a bad night on the red carpet as her Tom Ford dress exposes her private parts. 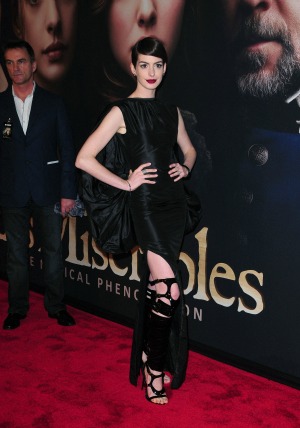 The poor girl is just trying to get an Oscar nomination but instead she gets a wardrobe malfunction. That was actress Anne Hathaway‘s night on the red carpet as she hit the New York premiere of her new film, Les Miserables.

It is pretty common for celebrities to leave their panties at home when they wear couture gowns, but her black Tom Ford gown betrayed Hathaway last night. As she was gracefully trying to get out of her limo, the thigh-high slit revealed her private parts. Of course, the cameras were all there to document that moment.

The photo has been making the rounds all over the internet. The more tasteful sites are covering up her exposure with a blurred out photo while other sites were clever to add a Les Mis poster to cover up, proving there is no such thing as bad publicity.

The 30-year-old newlywed was clearly unaware of what was happening when she exited the vehicle. In the photo, she tried to exit the SUV gracefully as a security guard offered his hand to guide her feet to the ground.

Despite the gaffe, the actress rocked the red carpet with her gorgeous gown, gamine hair and stunning bondage-style boots to create a dramatic look not often seen from her.

Hathaway is hoping for two Oscar nominations this year, not only for Les Mis, but also for her turn as Catwoman in The Dark Knight Rises. She will have to wait to find out her fate as the Academy Award nominations won’t be announced until Jan. 10.

In the meantime, keep those private parts under wraps!