Ice-T has been “disrespected” by wife Coco Austin. In the wake of racy photos of the reality star cuddling up with another man hitting the web, a public apology has been issued. Should he accept? 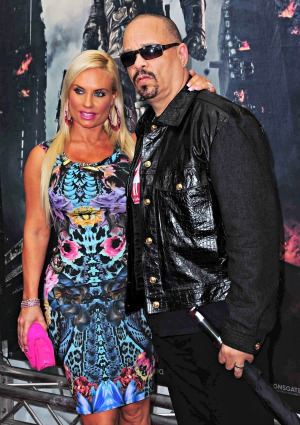 Ice-T and Coco are making headline news for all the wrong reasons. After a series of photos of the model and rapper AP.9 getting cozy in Vegas hit the web, the Law & Order: SVU actor temporarily lost his cool.

“Most of [the pics are] disrespectful and in bad taste,” Ice-T tweeted after seeing multiple pictures of Coco and AP.9 nearly smooching. “She’s made me look and feel like s**t.”

In one image Coco’s bright red lips are pressed to AP.9’s cheek, while in another his mouth is on her collarbone. A third image shows him kissing her on the cheek while standing behind her with his arms wrapped around her waist.

Coco Austin initially did little to help make amends with her husband of nearly 11 years.

Realizing later that this scandal wasn’t about to go away, she added, “Ice is right, the pics I took with this man were in poor taste & I disrespected my husband. However the pics were the only thing that happened.”

“I feel so sad. The bottom line is I love Ice & I can understand why he’s upset,” the 33-year-old added. “There’s no excuse for my actions. I’m so sorry baby & to everyone.”

Ice-T and Coco are set to celebrate their eleventh wedding anniversary on Dec. 31.

Do you think Ice should forgive Coco for the AP.9 photos?