In an exclusive red carpet interview with SheKnows at the American Country Awards, breakthrough country star Colt Ford offers some sartorial advice to Justin Bieber, should the two ever collaborate on a song. 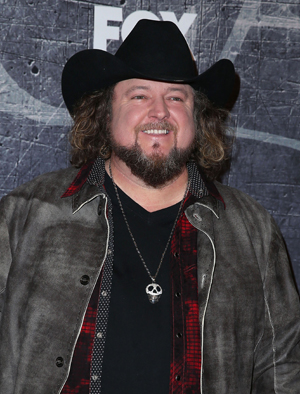 Colt Ford tells SheKnows in an exclusive interview on the red carpet of the American Country Awards that he’d be happy to work with Justin Bieber, as long as he adjusts his pants upwards.

Ford, a former professional golfer and golf instructor turned country singer, is known for his unusual-for-country influences and collaborators. In his breakout hit “Waste Some Time,” for instance, he trades off singing verses with country strummer Nic Cowan and rap quartet Nappy Roots.

He tells SheKnows that he’d absolutely do a song with Justin Bieber, as long as Justin took one small piece of fashion advice.

“We could do a song together, me and Justin,” he mused. “That’d be fun. You know what? I’m down to work with anybody that’s interested in doing something fun and creative and exciting. I’d make him pull his pants up a little bit, though; he’d have to do that.”

Ford, who describes himself in the lyrics of “Waste Some Time” as a “300-pound redneck rebel,” also told SheKnows that his red carpet walk at the American Country Awards made him excited for “fat guys everywhere.”

Ford (real name: Jason Farris Brown) was nominated for Breakthrough Artist at the American Country Awards; he lost to Jake Owen. The two collaborated on the single “Back” this year, which cracked the top 40 on the country charts.