SheKnows talks with country music star David Nail on the red carpet of the 2012 American Country Awards, and he admits that he’s longing to be a dad this year. 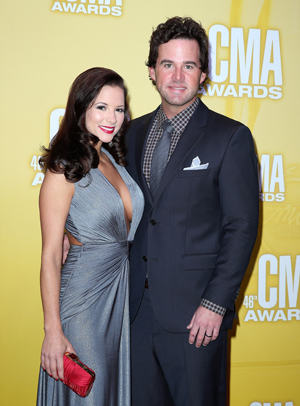 David Nail’s wife Catherine is on notice: The country star wants a baby in 2013.

In a conversation with SheKnows on the red carpet of the American Country Awards, Nail sweetly admitted he wants to be a daddy this year.

“I feel like I’ve always gotta rise to the pressure, that’s why I’m being out and open about it,” said Nail, whose wife was with him at the awards this year. “Maybe it’ll happen, one way or another.”

Nail, who was nominated for Single of the Year: Breakthrough Artist for his No. 1 country hit “Let It Rain,” lost to Brantley Gilbert’s “You Don’t Know Her Like I Do.”

American Country Awards: Luke Bryant’s the one to beat >>

Touring with Taylor Swift, for example, made him somewhat self-conscious.

“To see how evolved that show was, and how involved she was, how her fingerprints were just on everything,” Nail said. “Obviously for her to be so young, it was just very inspiring at times and it made you feel like you were worthless because you know you’re 10, 11 years older than her.”

Yeah, Taylor Swift makes a lot of people feel old and past it, David Nail. It’s not just you.