The ACAs couldn’t have chosen two more different hosts for the 2012 awards, but it turns out opposites might attract. 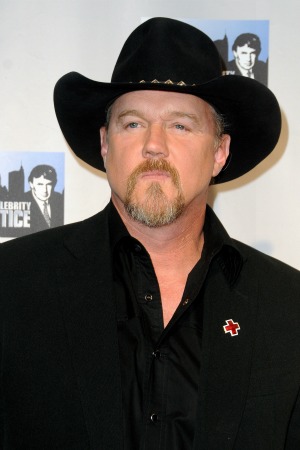 While we love Kristin Chenoweth, the choice as a host for a country award show seemed like a weird one. But, Chenoweth took the position and ran with it. The 2012 American Country Awards started with a skit by co-host Trace Adkins and Chenoweth, showcasing their difference in sizes (it looked to be about two feet), followed by him carrying her out on stage in a baby sling.

The co-hosts had a fun, but just innocent enough, flirty rapport all night. Adkins brought enough country to the show for both of them, and Chenoweth made sure the energy was up all night.

The world of Twitter seemed to be split, at least on Chenoweth. Because the viewers are country fans, many weren’t sure what to do with her. There were many others who didn’t even know who she was.

Adkins lived up to his reputation by performing during the ceremony. He took the stage with members of Lynyrd Skynyrd to sing their hit “What’s Your Name?” Chenoweth introduced him by saying that when you think southern rock, the first artist you think of is Justin Bieber, a joke the audience didn’t seem to appreciate (or even understand). But, she quickly recovered by introducing Adkins with the band.

Shortly after the performance, Chenoweth came back onstage dressed as Honey Boo Boo. Adkins looked confused and disturbed at the same time, but he went along with it.

A little later in the show, Adkins was playing his guitar onstage when he realized Chenoweth was in his guitar case. She said they were supposed to do a magic trick and he forgot about her.

“Brad Paisley would never, ever, ever do that to Carrie Underwood,” said Chenoweth.

Chenoweth then got onstage and gave her own performance of a song called “WWDD,” or “What Would Dolly Do?”

It seemed that Chenoweth was a little out of place throughout the night, but she pushed through it and did the best she could. Adkins seemed right where he feels comfortable, because it is his industry and his people. The crowd (as well as social media) seemed to love everything he did, and the ACAs made a great choice for the night.