The American Country Awards were Monday night in Las Vegas, Nevada. We break down the star-studded, fun awards show for all those who missed the broadcast. 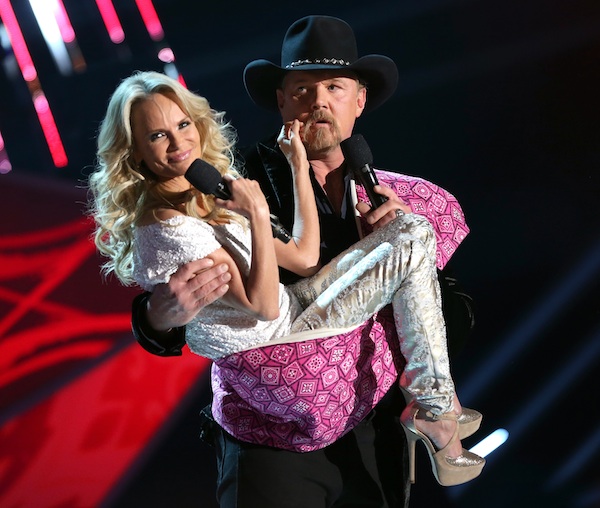 The American Country Awards were a fun and glamorous affair in Las Vegas, Nevada, on Monday night. After it’s all said and done, there’s no doubt Kristin Chenoweth stole the show along with those really cute country singers.

Luke Bryan opened the show for the American Country Awards in Las Vegas, Nevada. Bryan looked great in his leather jacket and tight black jeans but his performance seemed a little weak to us — maybe it just seemed too obvious he wasn’t really singing. Also, the song choice of “Kiss Tomorrow Goodbye” was not our first pick but it wasn’t bad. We would have preferred something a bit more up-tempo. However, given that “Kiss Tomorrow Goodbye” is Bryan’s latest number one hit, we understand the rationale.

There’s something about Kristin Chenoweth that is naturally funny. Plus, her laugh is contagious. The American Country Awards had a few skits with Chenoweth, one of which involved her dressing room filled with custom-made miniature furniture to make fun of her petite stature. The side-by-side comparison of Trace Adkins and Kristin Chenoweth made for great television. Chenoweth seemed far more natural in front of the camera and delivered her lines with a knack for comedic timing and tone.

Also, Kristin Chenoweth dressed up like Honey Boo Boo. Was the irony lost on the American Country Awards crowd?

Unlike Luke Bryan tonight, Dierks Bentley sounds great live. His performance seemed a bit less pop and a little more country. Bentley performed his latest hit “Country & Cold Cans,” which the crowd went wild for and loved every minute of his performance.

With her infectious hit “Georgia Peaches,” Lauren Alaina is posed for country superstardom. The former American Idol contestant not only made our American Country Awards best-dressed list, Alaina nabbed New Artist of the Year in Las Vegas. The 18-year-old gave a heartfelt, overwhelmed speech and truly seemed honored to win. Congratulations, Alaina!

Well, this took me back — to when I wasn’t even born. Trace Adkins performed with Lynyrd Skynyrd and it was really, really country. The performance was great, but I have to admit Trace Adkins took a backseat to Lynyrd Skynyrd, and that was probably for the best. Great guitar solos and awesome vocal performances livened up the show right in the middle when it was starting to get a bit dull.