Brand-new to the film world, Samantha Barks makes her movie debut in Les Miserables after starring as Eponine on the London stage, and admits how it felt to dive into such an epic project. 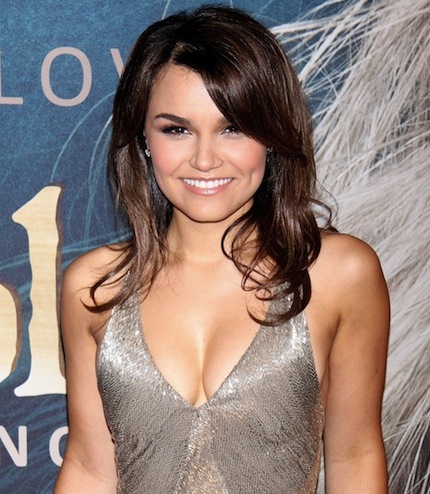 You may not recognize Samantha Barks‘ name if you’re not a theater fan, but that’s all about to change.

The theater actress is known for bringing the role of Eponine to life on the London stage, and now, after beating out famed actresses like Taylor Swift and Lea Michele for the part, she’s taking that role to the big screen in her film debut.

Samantha opens up to SheKnows about her nerves in making the transition to film, what it was like working with the big-name cast including Hugh Jackman and Amanda Seyfried and what kind of message she thinks the audience will get from Eponine’s tragic story.

SheKnows: Was it overwhelming to take on this role in the film after playing it onstage? Did you ever think of not going for it?

Samantha Barks: There was no part of me that wasn’t going for it. I never wanted anything more. It was intimidating for sure, it’s a world that I know nothing about. I know a lot about the character and about the piece. That was the only comforting thing heading into this unknown territory. I knew the role. Translating it onto film obviously had its challenges because vocally and emotionally, you are not projecting those emotions to 200 seats.

SK: How was it different for you playing the character without a live audience?

SB: Had we not done the live vocals, it would have been such a strange feeling. For me being able to at least bring that live aspect into the film, it felt more natural to me, because that is what I do.

SK: So it would have been hard to record in the studio and then lip-synch on film?

SB: It would have been so hard. I like to make choices as I sing in the present moment. You want to act in the moment. You can’t be predetermined by something you recorded ages ago. You’ve got to match your vocals to the emotion.

SK: A lot of big names like Lea Michele and Taylor Swift wanted to play Eponine. Did you hear those rumors?

SB: I didn’t really hear about it because for me I never wanted anything more. I was so focused. Every role you go for, there are going to be so many up for it. For me, it was about ignoring that because that wouldn’t do me any good. It wouldn’t have gotten me closer to the role, I just wanted to give it my all. I wanted to concentrate on what I could bring to it.

SK: What did you think when all the big names were cast and this was your first movie?

SB: It was exciting. As the casting process was going on and I heard Hugh Jackman, I was like “Wow.” It was the perfect star for casting Jean Valjean ever. Valjean is the trickiest part to cast. He has to be vocally so strong and he has to be physically strong and he has to be an incredible actor to portray the lifetime journey of this hero. Tom Hooper [the director] always said if Hugh Jackman wasn’t around, this movie wouldn’t exist. And Russell [Crowe, Javert] and Annie [Hathaway, Fantine], two phenomenal actors and so much screen experience.

SK: And it seemed so perfectly cast?

SB: Tom said it was the hardest thing that he has ever had to cast. Not only did they have to sing, they had to sing live and they had to have the acting ability to portray these emotional characters. That’s why the audition process was so grueling. I had to prove I could take this role from stage to screen. It was a gamble to cast me because I didn’t have any screen experience and I am so grateful that they did.

SK: How hard was it to sing in the rain while crying and dying?

SB: It’s hard. There are complications that come and you have to add an element of that into your voice. When I am crying, I am sniffly. It’s kind of when you try to speak and someone is crying. You can tell that they are crying by the little tweak in their voice. If you can carry that through to your singing voice, it’s going to have the same emotional effect. There were so many things to add in there and hopefully they came across in the vocals. I was trying to add a raw sound that was true to what I was trying to say or how my character was feeling while dying.

SK: Did you get to bond with Amanda Seyfried, who plays Cosette, at all since your characters were little girls together?

SB: We did actually bond. I’d been on set with all boys on the barricades. For a few weeks, I was the only girl on set, and Amanda arrived and I was like, “Yay, I can be girly!” It was fantastic, I got along with Amanda so well. We were in London and we had a picnic, and that was one of our earlier bonding experiences. She is brilliant and she’s so beautiful in this film. And it doesn’t help that she is devastatingly beautiful, her hair is so stunning.

SK: And she has the experience with movie musicals. Did she have any advice?

SB: She’s done Mamma Mia, so she has kind of experience of acting through song on-screen. But I think everyone felt this was a new experience because of doing the live vocals. It hasn’t been done before. I had never done a film before, Eddie [Redmayne, Marius] had never done a musical before. We all had aspects of how we could help and support each other. I don’t know much support I offered anyone [laughs] because I was the newcomer. We all brought something different to the table.

SK: What do you think the message from this film is for young women?

SB: From Eponine specifically, I think she is really a relatable character to a lot of young girls. I see a lot of girls on Twitter and she is like “Why am I always Eponine?” It’s really tough. I feel like Eponine is flying the flag for the broken-hearted and I think a lot of girls can relate to it. I always felt like I was the Eponine, you can kind of escape with her on this journey. Not that you want to be the unrequited love, but you just connect to her. She has a tragic ending, but she is redeemed by this love that she has for him. It makes her, in the end, only briefly, a good person. She leaves this earth with a good soul. With Eponine, she had such a hard life, so mistreated by her parents. I don’t think she ever witnessed how to be a good person, but I think there was a good heart under there.

SK: And she took a risk alerting Cosette to trouble and finding her for Marius?

SB: Marius is her everything in this world. She would do anything for him, even if it is bringing him to the love of his life — it was absolutely torture. With Marius, she’s useful and she is able to be engaged in a conversation with him. That’s the highlight of her week. When he asks her to do something, even though the task is horrific and leading him to his love, she thinks she is useful.

SK: So why didn’t she ever tell him that she loves him?

SK: Do you want to do more films now?

SB: I definitely have a taste for the film world, I am hungry for it now, but stage is my first love. It’s really about variation. I would love to do another film.

SK: What is your dream project?

SB: For me, it’s just about an exciting character, whether that be for film or stage. I was lucky to play such a beautiful character such as Eponine.