John Krasinski is eternally grateful that he doesn’t have to wait tables to make ends meet anymore, thanks to the success of The Office — but he’ll likely shed a few tears on the last day of filming. 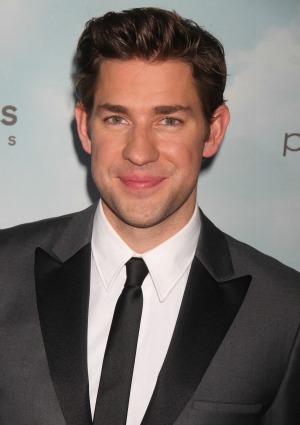 It’s the end of an era for John Krasinski. His hit show, perennial fan favorite The Office, is coming to an end this season, but rather than lament its loss the actor is just plain grateful that he’s been able to live his dream.

“I was 23 when I got the show and now I’m 33 so that’s a big important decade to be connected to one thing. I’m so honored to be a part of it and I wouldn’t take back one second of it,” Krasinski told Access Hollywood while promoting his new movie Promised Land.

“I was a waiter before the show, no one would know my name if it wasn’t for the show and I never would have gotten these opportunities that I’ve had. Aside from the fact that I think it’s one of the best shows ever, to be part of this family and this entity that we have is all great, but the truth is this is an era of my life.”

While the end of that era is sure to be emotional, don’t look for Krasinski to shed any tears until the absolute last minute.

John Krasinski credits The Office with his marriage >>

“I remember Steve [Carell]’s last day, the weeks leading up to it people were getting emotional and then the last day of shooting everybody was crying all over the place and I was like, ‘Guys pull it together, it’s going to be fine,'” he explained. “And then the last shot of the episode was my character is saying goodbye to him and then they call action and just out of nowhere [cries] and [I] just went up and hugged him.”

“So then you have two grown men having an existential crisis on camera and they were like, ‘None of this is on the script,’ so hopefully I plan it a little better than I did then.”