Beyonce and Pepsi have entered into a high-stakes game of celebrity endorsement — with a twist! A $50 million campaign has been launched that gives the singer more freedom and control than ever. 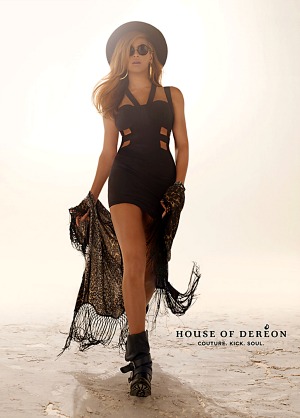 Beyonce and Pepsi’s new $50 million campaign is breaking ground in what a collaboration between an entertainer and a brand looks like. Not only does the soda company want the singer to do her song and dance, but to take the reins in the creative department as well!

“Pepsi embraces creativity and understands that artists evolve,” Beyonce said in a statement announcing her whopping $50 million project. “As a businesswoman, this allows me to work with a lifestyle brand with no compromise and without sacrificing my creativity.”

It’s no surprise the “Run the World” singer, seen here modeling for House of Dereon, has teamed up with Pepsi for 2013. A new ad, set to run at the Super Bowl that she’s headlining the halftime show for, will be her fifth for the company since their partnership began in 2002.

The New York Times reports the unique aspects of Beyonce’s $50 million partnership will be collaborative works that are as of yet not only undefined, but “might well have no explicit connection to Pepsi products.”

Ideas being tossed around during the brainstorming stage include live events, videos, “a cool photo shoot” or almost anything else, said Lee Anne Callahan-Longo, the general manager of Parkwood Entertainment, Beyonce’s company.

Beyonce HBO documentary on the way >>

“It’s wise for a brand like Pepsi to give an artist the ability to truly express herself,” said Ms. Callahan-Longo, “instead of just the old-school way of, ‘Do you want to be in an advertisement?'”

“This is much bigger,” she added. “This is, ‘How can we create something together that is truly unique?'”

Here’s a look back at Pepsi’s 2009 collaboration with Britney Spears, Pink and Beyonce: