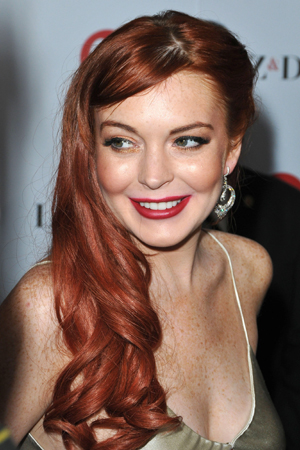 Protip: When you’re in serious trouble with the law, it’s probably wise not to party. Or, at least make sure your party pals don’t talk about your hard partying to the press.

Who are we talking about? Little miss Lindsay Lohan, of course. The actress — currently in big trouble for punching a woman at NYC nightclub Avenue — is tagging along on The Wanted‘s tour bus.

“It’s fun, she’s a good girl,” group member Max George told US Weekly over the weekend. “She can party nearly as hard as we can. We’re probably not the best influences.”

If you’ll recall, George is reportedly why Lohan punched the psychic in the NYC club — she thought the married blonde was trying to move in on her man. So, are they together now? It’s just a hookup, according to George.

“No, what’s the right word for her? A yeah, a groupie!” George told Yahoo! when asked whether or not they’re dating.

“She is probably hiding in our suitcase right now!” Nathan Sykes added.

At least she got a memento: George’s sweatshirt.

“Missing something?” she tweeted on Dec. 8, along with a photo of his sweatshirt.

Don’t be so obviously desperate, Linds.

At least one band member is sticking up for her when it comes to the nightclub fight.

“It’s a bit of a blur, actually,” Jay McGuiness told MTV News last week. “It was very odd. We actually carried on partying after that. It was reported that [the fight] was about Max, but I don’t think it actually was.”