CNN anchor and America’s Got Talent judge Piers Morgan tells The View that he was really stupid to take on One Direction’s army of millions of Twitter followers. 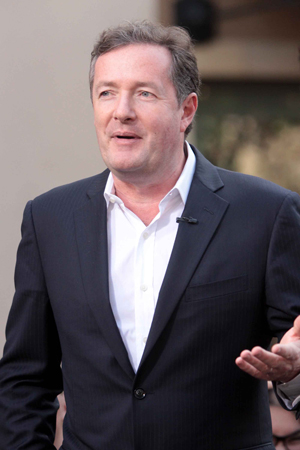 Just a few weeks after a Twitter battle with boy band One Direction caused the hashtag “PiersMorganissmelly” to trend worldwide, Morgan appeared on The View to explain the debacle.

Morgan says he didn’t realize just what he was stepping in when he tweeted that David Beckham’s soccer career was reaching its expiration date.

“No serious top-flight team would sign Beckham for football reasons any more – he should retire gracefully,” he wrote.

Cheekily, Morgan snapped back, “Is that because he always runs in one direction?”

Then Louis Tomlinson tweeted his love for Beckham, after which Morgan suggested Beckham should join up with One Direction, as his singing might be better than his soccer-playing.

That set off the band, who ganged up to get #PiersMorganissmelly to trend worldwide.

“It was like World War III,” Morgan said to the ladies of The View. “If you put them all together, they’ve got 37 million followers.”

And all of those followers were annoyed, particularly after Morgan posted a link to dorky photos of One Direction members at awkward younger ages.

Styles even tried to get Simon Cowell on the band’s side by tweeting “Hiiii @SimonCowell can you tell @piersmorgan to leave us alone please?”

After that, Morgan told The View, “every 13-year-old girl on the planet” was mad at him. Why were they so angry? “Maybe because I smell!”

Morgan said that the whole thing reminded him of the fight he got into with members of New Kids on the Block in 1991, after band members were annoyed with Morgan’s bad reviews in British newspaper The Sun.

Donnie Wahlberg got his revenge when he performed with the New Kids before a crowd of 12,000 at London’s Wembley Stadium with a “PIERS MORGAN SUCKS” sign in seven-inch-high letters.

Ultimately, Morgan boasted that the One Direction tiff earned him 11,000 new followers.