Former Baywatch babe Pamela Anderson finds herself as the latest celebrity to have two tax liens against her, thanks to a $371,000 bill. 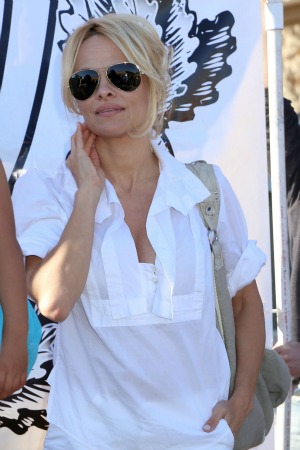 Why are celebrities avoiding the taxman? Pamela Anderson is the latest celebrity to join Lindsay Lohan and Stephen Baldwin with IRS problems. It’s a growing trend in Hollywood for celebrities whose careers have hit the skids and they haven’t cut back on expenses.

According to TMZ, Anderson not only owes money to the IRS, she also has a huge tax bill with the state of California to deal with.

The recent Dancing with the Stars contestant probably wishes she wasn’t voted off in Round 1 since it is rumored that the stars make more money each week they stay in the competition. The former Baywatch babe admitted that she didn’t rehearse much during her return to the ballroom dance floor and it showed.

Ironically, this isn’t her first time tackling the taxman. In 2009, she had a lien against her for $1.7 million and her name was added to the “Top 500 Delinquent Taxpayers.” This is a real list that exists for tax dodgers in California.

Now that the Playboy Playmate owes more than $371,000 and has two liens against her, it is unclear how she is going to pay off those bills. Her short stint with DWTS ended in September and the only project she has listed is a role as a “groupie” in an upcoming Jamie Kennedy movie called Jackhammer.

Perhaps Anderson, Lohan, and Baldwin could all go in to business together to help pay the IRS.