Lea Michele insists she is not a diva, and says she has the backup of some heavyweight players. Her breasts though, they’re a different story entirely. 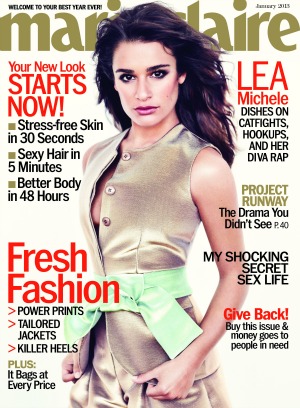 Lea Michele begs to differ with rumors that she is a total diva — but her breasts are a different story.

In the January issue of Marie Claire, the Glee star talks about her difficult reputation, her so-called run-in with Kate Hudson, her love for Cory Monteith and, of course, her boobs.

Turns out she is not as difficult as the tabloids would have us believe — at least, she doesn’t think so.

“I am a very outspoken person, and if something makes me uncomfortable, you will know that it makes be uncomfortable, but that’s as far as it goes,” she told the mag. “I can assure you that [diva rumors] aren’t real. It’s super-frustrating sometimes, and I used to fight back, but now I feel like, You can think what you want to think about me — that’s OK. I have the most amazing fans, friends, and family members who have stood by me, and I know that my cast and crew really enjoy working with me. That’s all that matters.”

And as far as those rumors go about her and Kate Hudson feuding on set?

Michele claims that Hudson called her personally to say, “‘I just heard about that, and it f**king sucks. I want you to know I think you’re amazing.’ [Hudson went] straight to the top of my list because it was so classy of her to take a minute to [address the rumor], even though we both knew it was the biggest piece of crap in the whole world. I told her ‘I love you, and I adore you. Thank you so much for creating a human moment with me.'”

Her boobs are a different story though — total divas.

“These babies are great,” she joked. “They are my prizewinners. For a while they were out and about, showing off on Broadway every night, then they came to L.A. and were like, ‘No one else looks like me here!’ They were nervous to make their appearance but feel they’ve earned their place. So they asked if they could come out, and I was like, ‘All right, you guys.’ They definitely rose to the occasion, so I’m going to continue to give them more opportunities.”

Boyfriend and Glee co-star Cory Monteith surely appreciates the perfect pair, along with Michele’s other attributes of course.

“I don’t even remember a time when he wasn’t my boyfriend. No one knows me better than Cory,” she said. “No one knows what it’s been like to go through this more than he does. Feeling like you have that net underneath you allows you to jump higher and go farther. He makes me feel like I can do anything. For the first time in my life, I feel really, really settled and happy. I feel like the luckiest girl in the world.”

Read the complete interview with Lea Michele in the January issue of Marie Claire, on newsstands Dec. 18.