Gerard Butler vehicle Playing for Keeps failed to connect with audiences, earning a miserable $2,115 per theater average. Do Americans hate soccer movies? Or is Butler’s career in need of some CPR? 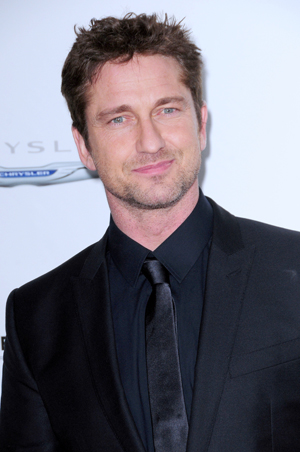 Gerard Butler and Jessica Biel’s soccer rom-com Playing for Keeps debuted in sixth place at the box office this weekend, behind weeks-old releases such as Skyfall, Rise of the Guardians, and Breaking Dawn — Part 2.

It’s the fourth misfire for Butler, whose last wide release, surf movie Chasing Mavericks, earned an anemic $5.8 million during the entire run of the film. The 2011 Shakespeare adaptation Coriolanus pulled in $757,195 and Machine Gun Preacher a mere $538,690.

Yikes! What hath become of the shirtless, grimacing “It guy” of 2007, whose King Leonidas in 300 thrilled the ladies and the gents alike? Butler isn’t even in sequel 300: Rise of an Empire, set to bow in 2013.

Gerard Butler calls Jessica Biel “the one that got away” >>

It could be argued that the studio didn’t have high hopes for Playing for Keeps, given that it handed the movie one of the ugliest, Photoshop wrecks of a poster imaginable: 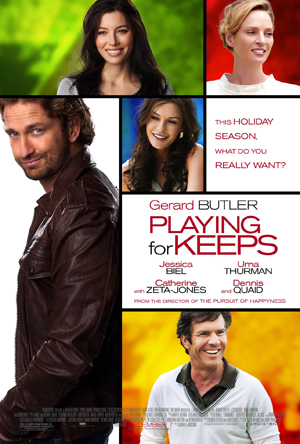 Elegant Catherine Zeta-Jones is almost unrecognizable, that is the least flattering image of gorgeous Uma Thurman one can imagine, and Butler’s look could be most charitably termed “fuzzy.”

Also, this poster strongly resembles that of several other so-so romantic comedies. To wit: 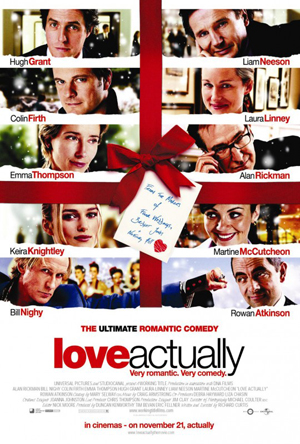 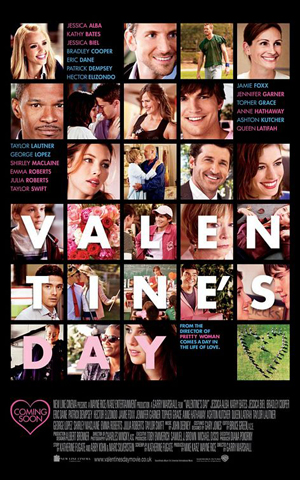 Seattle Times critic Moira Macdonald had kinder words… for Butler’s hair: “Absurdly thick and manfully curly” that’s subtly highlighted “as if from a finger from heaven.” It’s the man-hair equivalent even of “Hugh Grant in his floppy-bangs period; a great era for male movie hair.”

The movie itself? Not so good, says Macdonald. But the hair, it’s a movie star. Oh, and Butler does appear shirtless in the movie. At least it’s something.