Nurse Jacintha Saldanha killed herself on Friday, just three days after she mistook Australian radio hosts for the royal family. Now, the DJs are in hiding. 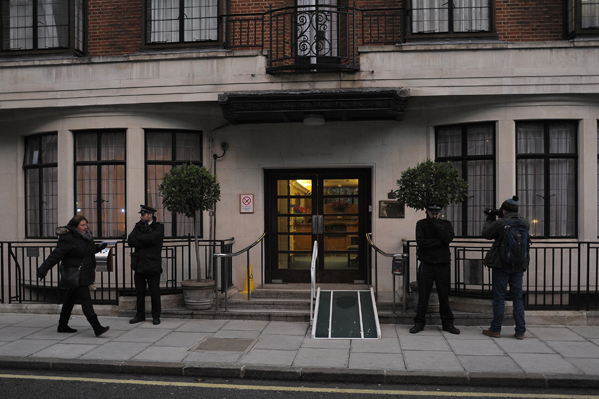 It was all fun and games earlier this week when a pair of Australian radio DJs prank called King Edward VII Hospital pretending to be Queen Elizabeth II and Prince Charles to a hospital nurse.

Fast forward three days: The nurse, Jacintha Saldanha, was found dead Friday of an apparent suicide, the hospital confirmed in a statement.

“It is with deep sadness that I can confirm the tragic death of a member of our nursing staff, Jacintha Saldanha,” John Lofthouse, the chief executive of King Edward VII Hospital in London, said in a Friday morning statement. “She was an excellent nurse and well respected and popular with all of her colleagues. We can confirm that Jacintha was recently the victim of a hoax call to the hospital.”

Prince William and Kate Middleton also expressed their sadness over her death in a statement.

“The Duke and Duchess of Cambridge are deeply saddened to learn of the death of Jacintha Saldanha. Their Royal Highnesses were looked after so wonderfully well at all times by everybody at King Edward VII Hospital, and their thoughts and prayers are with Jacintha Saldanha’s family, friends and colleagues at this very sad time.

Now, the two DJs — Mel Greig and Michael Christian from 2DayFM — have placed themselves in suspension and are in hiding.

“Chief executive officer Rhys Holleran has spoken with the presenters. They are both deeply shocked and at this time we have agreed that they not comment about the circumstances,” a spokesperson for 2DayFM owner Southern Cross Austereo said in a statement.

“SCA and the hosts have decided that they will not return to their radio show until further notice out of respect for what can only be described as a tragedy.”

The biggest question: Who — if anyone — is responsible for Saldanha’s death?