Another 90210 star is engaged! This time, it’s Shenae Grimes, who announced the happy news on Thursday. 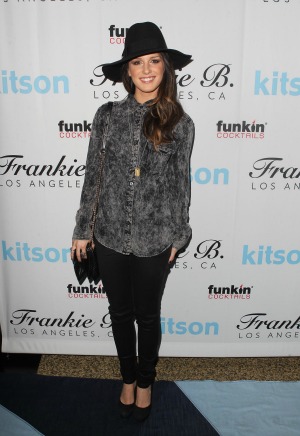 There is something in the water on the set of 90210 because another cast member is officially engaged. On Friday, Shenae Grimes announced on her website that she is engaged to be married.

The 23-year-old actress is engaged to 24-year-old British model Josh Beech. The couple have been dating since the spring.

Grimes wrote about her engagement saying, “Thanks for all the congratulations everyone, I’m a very happy lady indeed and all the warm wishes are well appreciated! We plan to keep our special day very private and we hope everyone can respect that. Thanks for the love, right back atcha!”

The Canadian actress and her fiancé have been spotted making out by the paparazzi all over Los Angeles the past few months, so the engagement comes as no surprise.

According to Us Weekly, the two are planning a British wedding sometime in 2013. A source told them, “Josh couldn’t see himself being with anyone else so he asked her and she is over the moon about it. They fell for each other hard and since they’ve met, they talk non-stop. If they’re not around each other, they’re texting, calling and tweeting back and forth all the time.”

Well, non-stop texting is definitely a sign that you should get married.

This engagement comes on the heels of fellow 90210 co-star Matt Lanter‘s engagement to his longtime girlfriend Angela Stacy. The couple got engaged in Paris in May with a 4.2-carat diamond ring.

90210 celebrated its 100th episode on Monday with campy guest appearances by Denise Richards, Carmen Electra and Taio Cruz. The show is currently in its fifth season on the CW network.